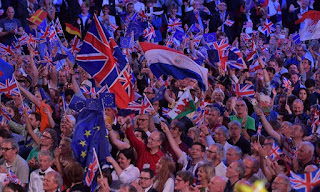 In the wake of the most ugly nationalism we have seen from a British government for some decades, here’s my oh-so-topical column on music cognition for the Italian magazine Sapere.

The nationalistic flag-waving at the Last Night of the Proms, the climax of an annual series of summer concerts in London, has always left me cold, and this year more than ever – though sadly, the threatened influx of European Union flags in protest at the British vote to exit the EU failed to materialize. In the current context, the obligatory and patriotic “Pomp and Circumstance” march by Edward Elgar seemed more painful than ever.

Is it, though, just familiarity (especially the “Land of Hope and Glory” section) that makes this piece seem so distinctly English? Apparently not. For it turns out that national characteristics are objectively imprinted on some classical compositions from the late nineteenth and early twentieth centuries, when Elgar, as well as other audibly “British” composers such as Gustav Holst and Ralph Vaughan Williams, were working.

Musical nationalism was big during this era, and it’s not difficult to sense that also in the stylings of Ravel and Debussy (France), Smetana and Janáček (present-day Czech Republic) and Granados and Albéniz (Spain). Some of these composers infused their works with the local culture by using folk melodies, but there’s more to the “national” feel than that.

Neuroscientist Aniruddh Patel and his coworkers have analysed themes from English and French composers of this era, specifically excluding those based on folk melodies, to compare their rhythms and rise and fall of pitch with the corresponding properties in spoken English and French.

The two languages have distinct patterns of stress, for example: English words tend to be stressed on the first syllable, French on the last (“Philip” versus “Philippe”). And there’s more variation in both vowel duration and pitch in English than in French. These differences can be precisely quantified, and Patel and colleagues found that they are mirrored in the respective countries’ music of that time. How far this is true of other nations isn’t yet clear, nor might it apply in earlier times when much of European music was in thrall to the innovations of the Italians.

Still, this is one of the ways in which music and language are closely related. It rather undermines Janáček’s conviction that music is universal: that without words you can’t tell a Czech folk song from and English or French one. It seems you really can, and for the same reason that you can distinguish the languages. Personally I welcome these local flavourings in music as much as I do in cuisine – although perhaps it also explains why Elgar strikes me as so much English stodge.
Posted by Philip Ball at 2:10 AM