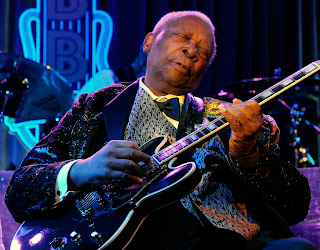 B. B. King, who died aged 89 on 14th May, was one of the first guitarists to evolve a style of playing that instantly identified him. His sweet, plaintive sound was so closely associated with the Gibson guitars he used to call Lucille that the Gibson Corporation launched a “Lucille” model in 1980. But it was the way he played them that mattered: bending notes that strayed far from the standard diatonic scale of Western music, especially on the fifth of the scale and the famous “blue” notes of blues and jazz: the third and the flattened seventh, which in the key of C correspond to E and B flat. The “blues third” lies in an ambiguous space between the minor third (E flat in C) and the major third (E natural), so that in the convention that makes major keys “happy” and minor keys “sad”, the blues – and especially B. B.’s blues – take on a bittersweet character, the sound of loves recalled and lost.

All this from simply playing “out of tune”? Well yes, because it’s precisely this quality that animates folk music in many traditions, giving it a soul that dies whenever classically trained musicians attempt to “go popular” and bring their perfect intonation to a musical form that demands rough edges. When musicologists and anthropologists first started to study folk music seriously in the early twentieth century, at first they often took the “imperfect” tunings to reflect poor technique – until they realised that the performers (usually singers) would replicate these off-key notes precisely from one rendition to the next. They knew what they were doing.

And what they were doing was what all music so often does when it pulls the emotions: it introduces uncertainty and ambiguity, creating a tension in the listener that turns into passion.

This is an easy principle to grasp, but fiendishly hard to get right. When other guitarists sought to emulate B. B., or singers to copy Billie Holliday doing the same thing with her vocal blue notes, they risked cliché or straining for effect. It takes exquisite judgement to keep the detuning emotive rather than kitsch. You’ve got to know how far to push it, perhaps quite literally. Will B. B. bend that note from a minor right up to a major third, “resolving” the discord and telling us that the story came good in the end? No, not quite – his hopes, like his intonation, are thwarted: joy withheld at the last moment. The thrill is gone.
Posted by Philip Ball at 12:50 AM