Waiting for the green (and blue) light 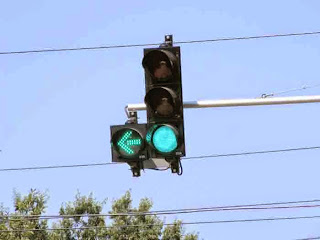 This was intended as a "first response" to the Nobel announcement this morning, destined for the Prospect blog. But as it can take a little while for things to appear there, here it is anyway while the news is still ringing in the air. I'm delighted by the choice.

Did you notice when traffic lights began to change colour? The green “go” light once was once a yellowish pea green, but today it has a turquoise hue. And whereas the lights would switch with a brief moment of fading up and down, now they blink on and off in an instant.

I will be consigning myself to the farthest reaches of geekdom by admitting this, but I used to feel a surge of excitement whenever, a decade or so ago, I noticed these new-style traffic lights. That’s because I knew I was witnessing the birth of a new age of light technology. Even if traffic lights didn’t press your buttons, the chances are that you felt the impact of the same innovations in other ways, most notably when the definition of your DVD player got a boost from the introduction of Blu-Ray technology, which happened about a decade ago. What made the difference was the development of a material that could be electrically stimulated into emitting bright blue light: the key component of blue light-emitting diodes (LEDs), used in traffic lights and other full-colour signage displays, and of lasers, which read the information on Blu-Ray DVDs.

It’s for such reasons that this year’s Nobel laureates in physics have genuinely changed the world. Japanese scientists Isamu Akasaki, Hiroshi Amano and Shuji Nakamura only perfected the art of making blue-light-emitting semiconductor devices in the 1990s, and as someone who watched that happen I still feel astonished at how quickly this research progressed from basic lab work to a huge commercial technology. By adding blue (and greenish-blue) to the spectrum of available colours, these Japanese researchers have transformed LED displays from little glowing dots that simply told you if the power was on or off to full-colour screens in which the old red-green-blue system of colour televisions, previously produced by firing electron beams at phosphor materials on the screen, can now be achieved instead with compact, low-power and ultra-bright electronics.

It’s because LEDs need much less power than conventional incandescent light bulbs that the invention of blue LEDs is ultimately so important. Sure, they also switch faster, last longer and break less easily than old-style bulbs – you’ll see fewer out-of-service traffic lights these days – but the low power requirements (partly because far less energy is wasted as heat) mean that LED light sources are also good for the environment. Now that they can produce blue light too, it’s possible to make white-light sources from a red-green-blue combination that can act as regular lighting sources for domestic and office use. What’s more, that spectral mixture can be tuned to simulate all kinds of lighting conditions, mimicking daylight, moonlight, candle-light or an ideal spectrum for plant growth in greenhouses. The recent Making Colour exhibition at the National Gallery in London featured a state-of-the-art LED lighting system to show how different the hues of a painting can seem under different lighting conditions.

As with so many technological innovations, the key was finding the right material. Light-emitting diodes are made from semiconductors that convert electrical current into light. Silicon is no good at doing this, which is why it has been necessary to search out other semiconductors that are relatively inexpensive and compatible with the silicon circuitry on which all microelectronics is based. For red and yellow-green light that didn’t prove so hard: semiconductors such as gallium arsenide and gallium aluminium arsenide have been used since the 1960s for making LEDs and semiconductor lasers for optical telecommunications. But getting blue light from a semiconductor proved much more elusive. From the available candidates around the early 1990s, both Akasaki and Amano at Nagoya University and Nakamura at the chemicals company Nichia put their faith in a material called gallium nitride. It seemed clear that this stuff could be made to emit light at blue wavelengths, but the challenge was to grow crystals of sufficient quality to do that efficiently – if there were impurities or flaws in the crystal, it wouldn’t work well enough. Challenges of this kind are typically an incremental business rather than a question of some sudden breakthrough: you have to keep plugging away and refining your techniques, improving the performance of your system little by little.

Nakamura’s case is particularly appealing because Nichia was a small, family-run company on the island of Shikoku, generally considered a rural backwater – not the kind of place you would expect to beat the giants of Silicon Valley in a race for such a lucrative goal. It was his conviction that gallium nitride really was the best material for the job that kept him going.

The Nobel committee has come up trumps here – it’s a choice that rewards genuinely innovative and important work, which no one will grumble about, and which in retrospect seems obvious. And it’s a reminder that physics is everywhere, not just in CERN and deep space.
Posted by Philip Ball at 1:50 PM