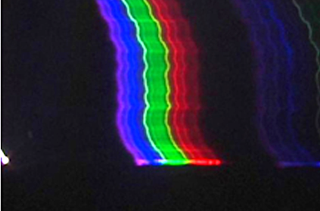 This ball lightning has got everywhere (like here and here and here), often inaccurately – the paper in Physical Review Letters doesn’t report the first time ball lightning has been captured on video, you can see several such events on YouTube. But it’s the first time that a spectrum of ball lightning has been captured, which lets us see what it’s made of. In this case, that’s apparently dirt: the spectrum shows atomic emission lines characteristic of silicon, calcium and iron. That seems to support the idea that this mysterious atmospheric phenomenon is caused by a conventional lightning strike vaporizing the soil – but actually it’s too early to say whether it supports any particular theory.

In any event, I got a preview of all this because I wrote the story for Physical Review Focus. And I have to say that the notion of conducting field observations on the Qinghai Plateau in the dark during a thunderstorm strikes me as not one of the most desirable jobs in science – Ping Yuan, the group leader, said in what I suspect is considerable understatement that this place is “difficult to access.”

It’s funny stuff, ball lightning. We used to regularly get papers submitted to Nature offering theories of it – these were particularly popular with the Russians – and I had the pleasure of publishing the oft-cited Japanese work in 1991 in which two researchers made what looked like a ball-lightning-style plasma ball in the lab. But we’ve still got a way to go in understanding it. Anyway, I’ve made a little video about this business too.

Addendum: Whoa, now I discover that I wrote this piece 14 years ago about the original theory that ball lightning is a bundle of vaporized dirt.
Posted by Philip Ball at 4:03 PM