What innovation really is 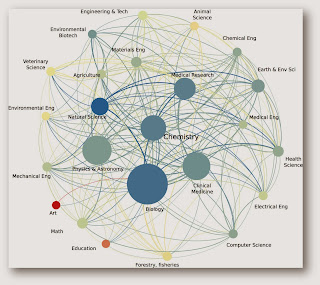 Here is my current Crucible column for Chemistry World. The plot above shows how chemistry’s ‘connectedness’ to other disciplines falls out in this analysis of citations – the size of the circles reflects the number of papers included in the analysis, the colours show the interdisciplinarity: the bluer, the more so.

How do you write a hit paper? The rise of bibliometrics and citation data-mining threatens to turn the answer into a reductive prescription: have many coauthors, make the paper longer, choose an assertive, catchy title. Yet the truth is that we have always known what generates the best chance of success: have a really interesting and productive idea, report it clearly and carefully, and publish it in a good journal.

That’s why a new paper analysing the ingredients of high-impact scientific papers (as defined by their citation counts) is best not viewed as another ‘how to’ formula. Rather, what Brian Uzzi and Ben Jones of Northwestern University in Illinois and their colleagues have supplied [B. Uzzi et al., Science 342, 468 (2013)] is a retrospective account of why some papers made their mark. It’s a bit like examining why the Beatles’ songs are so popular – it’s one thing to explain it, quite another to use that knowledge to write another “Eleanor Rigby”.

The real value of this work is in underlining the importance of innovative thinking – as well as clarifying what genuine novelty consists of. The idea is ingenious in itself (my guess is that if the researchers trained their lens on their own paper, it would predict considerable impact). While it is hard to quantify the intrinsic novelty of the ideas expressed in a paper, the reference list generally gives a fair indication of the intellectual heritage on which they draw.

So if the references are all taken from a narrow body of highly specialized and specific work, the chances are that the paper itself represents just another incremental advance in that area, and is going to have limited appeal outside a tiny circle. But a paper with a bizarrely diverse selection of references – here the Journal of Natural Products, there Kierkegaard’s Fear and Trembling – all too probably indicates a comparable incoherence in the authors’ minds.

What Uzzi and colleagues consider, then, is the balance between ‘typical’ and ‘atypical’ in the reference list. Using a database of 17.9 million papers in the Web of Science spanning all scientific fields (in fact they have ventured into the humanities too), the researchers looked at how often all possible pairs of papers (or journals) in a given year were cited together. A comparison against purely random pairings then reveals how ‘conventional’ such a pairing is, enabling an enumeration of the conventionality of any paper’s entire reference list.

It will surprise no one to hear that scientific papers are on the whole highly conservative by this measure. But Uzzi and colleagues figured that the relatively unusual combinations of citations – those in the tail of the distributions – might be particularly revealing. They found that even these tended to be ‘typical’: the less-common pairings of journal A, say, tend to be with journals G and K rather than more random.

The real story emerges when these citation patterns are compared between high-impact and low-impact papers. The former are no less firmly embedded in convention – except, crucially, for the unusual reference combinations in the tail of their distributions, which show a strong degree of novelty. In other words, these papers anchor themselves to a substantial body of related, specialized work, but inject into it ideas and results from farther afield than lower-impact papers tend to reach. “Thus, novelty and conventionality are not opposing factors in the production of science”, Uzzi and colleagues say. As one might imagine, novelty in this sense seems to appear more often in papers written by collaborating teams, which can mine insights from different disciplines.

What does all this mean in chemistry? The paper itself gives no breakdown by discipline, but Brian Uzzi has kindly supplied me with a few indicators. On the basis of how often papers within the discipline cite ones from outside, chemistry scores highly as an interdisciplinary subject – second only to biology, comparable to medical research, and better than, say, physics or earth sciences. Moreover, its cross-disciplinary handshakes are very diverse, although the affinities with medicine and biology are evident. On this basis, the common claim that chemistry is the “central science” seems well justified.

No doubt individual case histories of high-impact chemical papers would tell instructive stories. Two papers from Chemical Communications in 1994 offer a representative snapshot. One, on polymer synthesis, reaches out only to other journals of polymer and organic chemistry but without even the benefit of conventional pairings therein. It had 12 citations. Another, on the synthesis of derivatized gold nanoparticles, combines popular pairings such as JACS-Angewandte Chemie with novel links to the literature on clusters; it had nearly 4,000 citations.

If you want a moral, it is surely to talk to people outside your group, and ideally outside your department, and if possible work with them. But at the same time don’t neglect the core of your own subject. Easily said, I know – but the best advice usually is.
Posted by Philip Ball at 7:47 AM