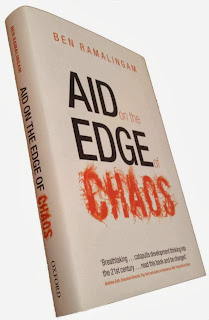 In working on my next book (details soon), I have recently been in touch with a well-known science-fiction author, who very understandably felt he should take the precaution of saying that our correspondence was private and not intended for blurb-mining. He said he’d had a bad experience of providing a blurb years back and had vowed to have a blanket ban on that henceforth.

That’s fair enough, but I’m glad I’m able to remain open to the idea. I often have to decline (not that my opinion is likely to shift many copies), but if I never did it at all then I’d miss out on seeing some interesting material. I certainly had no hesitation in offering quotes for a book just published by OUP, Aid on the Edge of Chaos by Ben Ramalingam. Having seen the rather stunning list of endorsements on Amazon, I’m inclined to say I’m not worthy anyway, but there’s no doubt that Ben’s book deserves it (along with the glowing reader reviews so far). Quite aside from the whole perspective on aid, the book provides one of the best concise summaries I have seen of complexity science and its relation to human affairs generally – it is worth reading for that alone.

The book’s primary thesis is that these ideas should inform a rethinking of the entire basis of international aid. In particular, aid needs to be adaptive, interconnected and bottom-up, rather than being governed by lumbering international bodies with fixed objectives and templates. But Ben is able to present this idea in a way that does not offer some glib, vague panacea, but is closely tied in with the practical realities of the matter. It is a view wholly in accord with the kind of thinking that was (and hopefully still is) being fostered by the FuturICT project, although aid was one of the social systems that I don’t think they had considered in any real detail – I certainly had not.

I very much hope this book gets seen and, more importantly, acted on. There are plans afoot for its ideas to be debated at the Wellcome Trust's centre in London in January, which is sure to be an interesting event.
Posted by Philip Ball at 8:52 AM