Here is my latest piece for BBC Future. I have also posted a little comment on the work on a Youtube channel that I am in the process of creating: see here. It’s an experiment, about which I will say more later.

“Everyone on this planet is separated by only six other people”, claims a character in John Guare’s 1990 play Six Degrees of Separation, which provided us with the defining image of our social networks. “It’s a small world”, we say when we meet someone at a party who turns out to share a mutual friend. And it really is: the average number of links connecting you to any other random person might not be exactly six – it depends on how you define links, for one thing – but it is a small number of about that size.

But has it always been this way? It’s tempting to think so. Jazz musicians in the early 20th century were united by barely three degrees of separation. Much further back, scientists in the seventeenth century maintained a dense social network via letters, as did humanist scholars of the Renaissance. But those were specialized groups. Intellectual and aristocratic elites in history might have all known one another, but was it a small world for ordinary folk too, when mail deliveries and road travel were hard and dangerous and many people were illiterate anyway? That’s what networks expert Mark Newman of the University of Michigan at Ann Arbor and his coworkers have set out to establish.

The modern understanding of small-world social networks has come largely from direct experiments. Guare took his idea from experiments conducted in the late 1960s by social scientist Stanley Milgram of Harvard University and his coworkers. In one study they attempted to get letters to a Boston stockbroker by sending them to random people in Omaha, Nebraska, bearing only the addressee’s name and profession and the fact that he worked in Boston. Those who received the letter were asked to forward it to anyone they knew who might be better placed to help it on its way.

Most of the letters didn’t arrive at all. But of those that did, an average of only six journeys were needed to get them there. A much larger-scale re-run of the experiment in 2003 using email forwarding found an almost identical result: the average ‘chain length’ for messages delivered to the target was between 5 and 7 [P. S. Dodds, R. Muhamad & D. J. Watts, Science 301, 827 (2013)].

Needless to say, it’s not possible to conduct such epistolary experiments for former ages. But there are other ways to figure out what human social networks in history looked like. These networks don’t only spread news, information and rumour, but also things that are decidedly less welcome, such as disease. Many diseases are passed between individuals by direct, sometime intimate contact, and so the spread of an epidemic can reflect the web of human contacts on which it happens.

This is in fact one of the prime motivations for mapping out human contact networks. Epidemiologists now understand that the structure of the network – whether it is a small world or not, say – can have a profound effect on the way a disease spreads. For some types of small world, infectious diseases can pervade the entire population no matter how slow small the chance of infection is, and can be very hard to root out entirely once this happens. Some computer viruses are like this, lurking indefinitely on a few computers somewhere in the world.

Newman and colleagues admit that networks of physical contact, which spread disease, are not the same as networks of social contact: you can infect people you don’t know. But in earlier times most human interactions were conducted face to face, and in relatively small communities people rarely saw someone who they didn’t recognize.

The fact that diseases spread relatively slowly in the pre-industrial world already suggests that it was not a small world. For example, it took at least three years for the Black Death to spread through Europe, Scandinavia and Russia in the 14th century, beginning in the Levant and the Mediterranean ports. 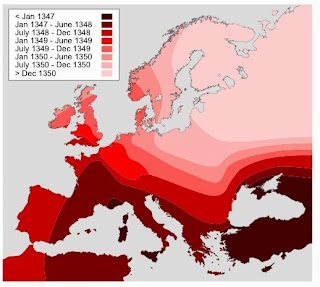 However, network researchers have discovered that it takes only a very small number of ‘long-distance’ links to turn a ‘large world’ network, such as a grid in which each individual is connected only to their nearby neighbours, into a small world.

Newman and colleagues have used this well documented spread of the Black Death to figure out what the underlying network of physical contacts looked like. The disease was spread both by direct person-to-person transmission of the pathogenic bacterium and by being carried by rats and fleas. But neither rats or fleas travel far unless carried by humans, for example on the ships that arrived at the European ports. So transmission reflects the nature of human mobility and contact.

The researchers argue that the crucial point is not how quickly or slowly the disease spread, but what the pattern was like. It moved through the Western world rather like an ink blot spreading across a map of Europe: a steady advance of the ‘disease front’. The researchers’ computer simulations and calculations show that this is possible only if the typical path length linking two people in the network is long: if it’s not a small world. If there were enough long-range links to produce a small world, then the pattern would look quite different: not an expanding ‘stain’ but a blotchy spread in which new outbreaks get seeded far from the origin of the infection. 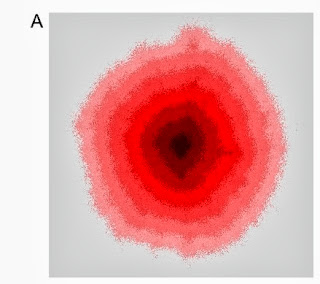 A: Spreading of an infectious disease in a "large world" 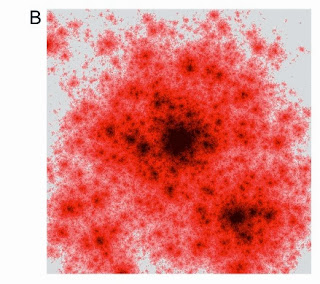 B: Spreading in a "small world"

So if the world was still ‘large’ in the 14th century, when did it become ‘small’? Newman and colleagues hope that other epidemiological data might reveal that, but they guess that it happened with the advent of long-distance transportation in the 19th century, which seems also to have been the time that rapidly spreading epidemics appeared. There’s always a price for progress.

Good YouTube presentation. Did you read a script, or 'go commando'?

Are you close to the camera because of the microphone?

I wouldn't know how to read a script and look at the camera at the same time, even if I had the time to write one.
And I'm too close to the camera because I'm a bit incompetent. But I will back off in future...