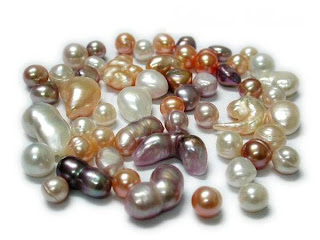 Here’s the previous fortnightly piece for BBC Future. That published today is coming up soon.

Of all nature’s defence mechanisms, molluscs surely have the most stunning. If a foreign particle such as an abrasive sand grain or a parasite gets inside the soft body of a mollusc – most pearls are made by oysters, though clams and mussels will make them too – the organism coats it in nacre (mother of pearl), building up a smooth blob of this hard iridescent material. The mollusc is, of course, oblivious to the fact that this protective capsule is so gorgeous. Pearls can be white, grey, black, red, blue, green or yellow, and their attraction for humans has led to traditions of pearl-diving that are thousands of years old. Today pearls are harvested in oyster farms in the Indian Ocean, East Asia and all across the Pacific, in which pearl production is stimulated artificially by inserting round beads into the molluscs to serve an a seed.

Yet in spite of the commercial value of pearl production, the formation of pearls is still imperfectly understood. Only the most highly prized pearls are perfectly spherical. Many have other shapes: elongated and ovoid, say, or the teardrop shape that works well for earrings. Some, called baroque pearls, are irregular, like blobs of solder pinched off at one end into a squiggly tail. It’s common for pearls to adopt a shape called a solid of revolution, roughly round or egg-shaped but often with bands and rings running around them latitudinally, like wooden beads or bedknobs turned on a lathe. In other words, the pearl has perfect ‘rotational symmetry’: it looks the same when rotated by any amount on its axis. When you think about it, that’s a truly odd shape to account for.

It’s recently become clear that pearls really are turned. Pearl farmers have long suspected that the pearl might rotate as it grows within the pouch that holds it inside the soft ‘mantle’ tissue of the mollusc. In 2005 that was confirmed by a report published in an obscure French-language ‘journal of perliculture’, which stated that a pearl typically rotates once every 20 days or so. This would explain the rotational symmetry: any differences in growth rate along the axis or rotation get copied around the entire circumference.

But what makes a pearl turn? Julyan Cartwright, who works for the Spanish Research Council (CSIC), and his colleagues Antonio Checa of the University of Granada and Marthe Rousseau of the CNRS Pharmacologie et Ingénierie Articulaires in Vandoeuvre les Nancy, France, have now come up with a possible explanation.

Nacre is an astonishing material in its own right. It consists mostly of aragonite, a form of calcium carbonate (the mineral fabric of chalk), which is laid down here as microscopic slabs stacked in layers and ‘glued’ with softer organic membranes of protein and chitin (the main component of the insect cuticle and shrimp shell). This composite structure, with hard layers weakly bonded together, makes nacre extremely tough and crack-resistant, which is why materials scientists seek to mimic its microstructure in artificial composites. The layered structure also reflects light in a manner that creates interference of the light waves, producing the iridescence of mother-of-pearl.

The slabs of aragonite are made from chemical ingredients secreted by the same kind of cells responsible for making the mollusc’s shell. Several layers grow at the same time, creating terraces that can be seen on a pearl’s surface when inspected under the microscope.

Cartwright and colleagues think that these terraces hold the key to a pearl’s rotation. They say that, as new molecules and ions (whether of calcium and carbonate, or chitin or protein) stick to the step of a terrace, they release energy which warms up the surface. At the same time, molecules of water in the surrounding fluid bounce off the surface, and can pick up energy as they do. The net result is that, because of the conservation of momentum, the step edge recoils: the surface receives a little push.

If terrace steps on the surface were just oriented randomly across the pearl, this push would average out to zero. But for pearls with a solid-of-rotation shape, it’s been found that the terraces are arrayed in parallel like lines of longitude on a globe, creating a ratchet-like profile around the circumference of the pearl. Because of this ratchet shape, impart a preferred direction to the little impulses received by the pearl from molecular impacts on the vertical faces of the steps, causing the growing pearl to rotate. The researchers’ rough estimate of the size of this force during growth of a typical pearl shows that it should produce a rotation rate more or less equal to that observed.

In other words, the pearl can become a kind of ratchet that, by virtue of the unsymmetrical step profile of its surface, can convert random molecular motions into rotation in one direction.

The researchers can also offer an explanation for where the ratchet profile comes from in the first place. If by chance a growing pearl starts to turn in a particular direction, feedbacks in the complex crystallization process on the pearl surface will cause the step edges to line up longitudinally (that is perpendicular to the rotation), creating the ratchet that then sustains the rotation.

The researchers admit that there are still gaps to be filled in their argument, but they say that the idea might be applied to make little machines that will likewise rotate spontaneously powered only be ambient heat. But don’t worry: they haven’t invented perpetual motion. The rotation is ultimately powered by the heat released during the chemical process of crystallization, and it will stop when there is nothing left to crystallize – when the ‘fuel’ runs out.