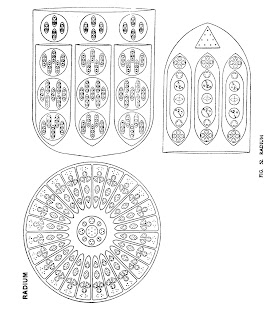 Here is my Crucible column in the latest issue of Chemistry World.

A strong contender for the strangest book about chemistry ever written is Occult Chemistry (1909) by Annie Besant and Charles Leadbeater. It offers an element-by-element account of what atoms really look like, and the answer is that they are astonishingly rich in substructure and detail – some like ornate frozen splashes, others resembling the rose windows of Gothic cathedrals. Far from being unsplittable – this was 8 years before Ernest Rutherford astonished the world by “splitting the atom” – these atoms are composites of more fundamental particles, of which hydrogen is composed of 18 and nitrogen of no fewer than 290.

You’re wondering, no doubt, how on earth the authors knew all this in the days before X-ray diffraction, electron microscopy and high-energy particle physics. The answer is that they saw it for themselves. Besant was President of the Theosophical Society, the Eastern-tinged mystical group founded by the Russian medium Madame Blavatsky, and Leadbeater was a Spiritualist medium. Their occult powers enabled the duo to shrink their perceptive faculties to atomic dimensions, whereupon they could perceive the shapes of atoms directly.

So far, so deluded. But that was a very strange time, and one can’t quite just dismiss Besant and Leadbeater as mad fantasists. They were connected with, and in a wider sense in tune with, several leading scientists of their age, some of whom read the book (with varying degrees of scepticism). Like it or not, Occult Chemistry is a part – a bizarre, even unsettling part – of chemical history.

While Blavatsky was little more than a wily, self-promoting fraud, Besant warrants more consideration. Born in 1847, she was a fearless social campaigner, arguing for women’s rights and birth control, better conditions for workers, free school meals, educational reform, and home rule for India, her spiritual home. Her conversion to Blavatsky’s pseudo-religion in 1889 dismayed many of her progressive friends, including George Bernard Shaw, but it didn’t in itself mark her out as odd in an age when mystical inclinations were shared by many scientists, most notoriously the Spiritualist sympathizers Oliver Lodge and William Crookes.

Crookes, the chemist and entrepreneur who was President of the Royal Society from 1913 to 1915, was himself a member of the Theosophical Society, and was convinced that Spiritualism offered glimpses into an invisible world populated by spirit beings. He was flattered and courted by the Theosophists – Blavatsky referred to his work on an alleged new form of ‘radiant matter’ – and Besant sent him an initial account of her ‘occult chemistry’ published in the Theosophical magazine Lucifer in 1895. Since Crookes had suggested in 1887 that elements might be sub-divided further into a basic ingredient called protyle, he was somewhat sympathetic to Besant and Leadbeater’s assertions, and he seems to have replied politely, telling Besant that the book might encourage chemists to search for the missing elements in Mendeleyev’s periodic table1.

Besant and Leadbeater claimed they had used mediation techniques to gaze on atoms with ‘etheric eyes’. This revealed atoms with elaborate, lobed shapes that fall into distinct classes: ‘spikes’, ‘dumbbells’ and arrangements like the Platonic solids. Closer inspection showed a substructure made up of units they call anu, the Sanskrit word for atoms. The anu are themselves “atoms of ether”, the medium still then considered the matrix of electromagnetic waves, and here identified with Crookes’ protyle. That the ether was a particulate material was not in itself an outrageous suggestion – Mendeleyev believed this too. Some scientists, including Crookes, suspected the ether was a bridge between the physical and spiritual worlds.

Most of Occult Chemistry in taken up with descriptions and diagrams of these elemental substructures. The images are mesmerizing, elaborated in meticulous and often beautiful detail. With their ‘sciency’ appearance, bedded down amidst numerical calculations, it’s easy to see how – especially at a time when the discoveries of X-rays, electrons, radioactivity and atomic structure were making atomic physics a veritable phantasmagoria where anything seemed possible – contemporary readers might have found this stuff impossible to distinguish from real science. But the allure goes deeper, for you can’t look at these images today without experiencing some frisson. The triplets of fundamental particles at the atom’s core must put you in mind of the quark structure of nucleons – and indeed it’s been argued that the revelations of Occult Chemistry bear uncanny resonances with the discoveries of particle physics2. What’s more, the lobes and dumbbells speak immediately to the chemist of the electron orbitals shortly to emerge from quantum chemistry. It’s sheer coincidence – has to be, right? – but it’s eerie all the same.

What most of Crookes’ contemporaries made of all this is unknown. But I bet they were intrigued. J. J. Thomson, the discoverer of the electron, went to séances, as did Pierre Curie. George Johnstone Stoney, who named the electron, was convinced that the universe was an infinite series of worlds within worlds. Francis Aston, the discoverer of isotopes, read the book and borrowed from it the term “meta-neon” to refer to his newly discovered neon-22 (ref. 3).

Occult Chemistry is, then, pretentious and outrageous – but curiously compelling.