On Growth and Form 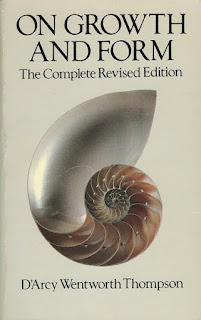 Here’s an article on D’Arcy Thompson’s classic On Growth and Form, published in the “In Retrospect” slot of this week’s Nature. I am nearly through, at last, with the writing and editing of a forthcoming special issue of Interdisciplinary Science Reviews on Thompson and his influence, out in March (if we're lucky).

Like Newton’s Principia, D’Arcy Thompson’s On Growth and Form is a book more often cited than read. They are both hefty tomes – Thompson’s revised edition in 1942 weighed in at over 1,000 pages, to the considerable alarm of Cambridge University Press when the long awaited revision finally arrived.

And both books stand apart from their age. Each contains ideas ahead of their time, yet seems at the same time rooted in earlier traditions. First written in 1917, with the Modern Synthesis of Neodarwinian biology one or two decades away and genes themselves still a nascent concept, how much of On Growth and Form remained relevant even by the time of the second edition, let alone today?

Thompson’s agenda is captured in the book’s epigraph by statistician Karl Pearson (published in Nature in 1901): “I believe the day must come when the biologist will – without being a mathematician – not hesitate to use mathematical analysis when he requires it.” Thompson presents mathematical physical science as a shaping agency that may supersede natural selection, showing how the structures of the living world often echo those in inorganic nature.

Thompson’s conversation to a mathematical biology was, like the man himself, idiosyncratic. The son of a Cambridge classicist, he went to Edinburgh to study medicine before switching to zoology at Cambridge – the same trajectory as Darwin. There he supplemented his income by teaching Greek, but, failing to secure an appointment at Trinity, he returned to Scotland as (in effect) a marine biologist at the University of Dundee. His frustration at the ‘Just So’ explanations of morphology offered by Darwinians burst out in a 1894 paper presented at the British Association meeting, “Some difficulties of Darwinism”, in which he argued that physical forces, not heredity, may govern biological form.

On Growth and Form elaborated at length on this theme. It was written by 1915 but delayed by the First World War, and by the time it was published Thompson had moved a few miles down the bleakly beautiful North Sea coast to the University of St Andrews. “We want to see how, in some cases at least”, he wrote, “the forms of living things, and of the parts of living things, can be explained by physical considerations, and to realise that in general no organic forms exist save such as are in conformity with physical and mathematical laws.”

Thompson’s demonstration of this claim takes him through a formidable range of topics: to name a few, the scaling laws of growth, flight and locomotion, the shapes of cells, bubbles and soap films, geometrical compartmentalization and honeycombs, corals, banded minerals, radiolarians, mollusc shells, antlers and horns, plant shapes, bone microstructure, skeletal mechanics, and the morphological comparison of species. Perhaps the central motif is the logarithmic spiral, which appears on the slate plaque commemorating Thompson’s former residence in St Andrews. He saw it first in the whorled form of foraminifera, and again in seashells, horns and claws, insect flight paths, phyllotaxis. This, to Thompson, seemed to imply some general principle of growth operating throughout nature: evidence of the universality of form and the reduction of a diverse array of phenomena to a few mathematical governing principles.

How much of this has stuck? It’s common for evolutionary and developmental biologists today to genuflect to his breadth and imagination while remaining sceptical that he told us much of lasting value about why living things look the way they do.

Thompson was reacting against the Darwinism of his age and not ours: against the first flush of enthusiasm, when it seemed adequate to account for every biological feature with a reflexive plea to adaptation. Thompson’s insistence that biological form had to make sense in engineering terms was a necessary reminder, but did not fundamentally challenge the idea that natural selection was evolution’s scalpel – it merely imposed constraints on the form that might emerge. “I have tried to make [the book] as little contentious as possible”, he wrote when he sent the manuscript of On Growth and Form to the publisher in 1915. “That is to say where it undoubtedly runs counter to conventional Darwinism, I do not rub this in, but leave the reader to draw the obvious moral for himself.”

Thompson believed that evolution could sometimes advance in a leap rather than a shuffle – still a hotly discussed issue today. But although On Growth and Form does not offer anything inconsistent with Neodarwinian genetics, the debate that Thompson tried to initiate about contingency versus necessity in biological form has never been resolved, and in some ways has not really yet been engaged. There are still biologists who believe that almost every feature of an organism must be adaptive. There are still unresolved questions about how deterministic the course of evolution is.

This is one reason to keep On Growth and Form in the canon. Another is the modern appreciation of self-organization as a means of developing complex form and pattern from simple physical rules. Here D’Arcy Thompson is not as easy to enlist as a prophet as one might expect. Many of the systems he looked at, such as the formation of the chemical precipitation patterns called Liesegang rings, the striped markings of animals, and the formation of polygonal crack networks, are now firmly recognized as paradigmatic examples of spontaneous self-organization in complex systems. But Thompson is often foxed by such things, giving them only a glancing mention while either confessing that he has no real explanation or assuming that it must be a simple one. He says of Liesegang rings, “For a discussion of the raison d’être of this phenomenon, the student will consult the textbooks of physical and colloid chemistry.” The student would have found little there in 1917, and some aspects of this chemistry are still being clarified.

The tradition from which On Growth and Form emerged was a rather different one: the biophysics and biomechanics of anatomists such as Wilhelm His and Wilhelm Roux. It is probably this strand that most securely ties Thompson to the present, for much of cell biology now centres on issues of how the mechanics of cell structures determine the fates and forms of tissues and the transport of constituents. Recent years have seen this somewhat undervalued aspect of biophysics becoming more integrated into the rest of molecular biology, as we come to realise how much mesoscale mechanics modulate gene and protein behaviour.

The precise legacy of On Growth and Form is, therefore, mixed. But much of the admiration expressed by fans like Stephen Jay Gould and Peter Medawar stems from a more general consideration: Thompson’s breadth of scholarship, coupled to his elegance of description. One doesn’t forget, reading his masterpiece, that he was a classicist as well as a scientist. There is more than a little of the antiquarian collector of curiosities in his persona. And at a time when science was succumbing to the specialization that has now become something of a liability, Thompson showed the value of synoptic thinkers who were prepared to risk being quite wrong here and there for the sake of an inspirational vision. These people are always mavericks, our Lovelocks, Mandelbrots, Goulds and Wolframs, and they still tend to present their ideas with a broad brush in books, rather than a conventional succession of closely argued papers. They excite strong responses, and sometimes they are exasperating. But science must make sure they do not, in an age of Big Science, tenure battles and funding crises, become extinct.

The D'Arcy Thompson Zoology Museum at the University of Dundee Museum Collections is currently displaying the first works acquired through a grant from the Art Fund to build a collection of art inspired by Thompson’s work.
Posted by Philip Ball at 2:57 PM