Here’s my Crucible column for the June issue of Chemistry World. Incidentally, since the magazine chose to illustrate its regular contributors using artwork rather than photos, I have become the man with the narrowest shoulders in chemistry. 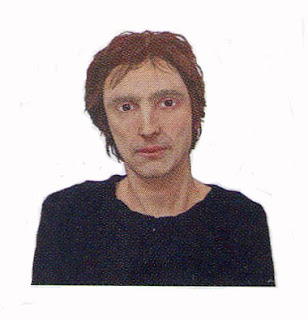 This is because I provided them with a photo without shoulders showing, so they drew them in. Andrea Sella, meanwhile, has become an uber-geek – 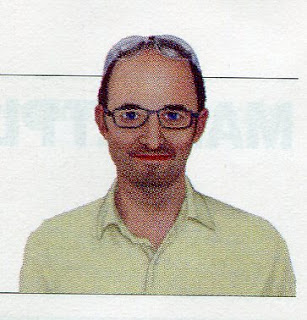 - which I suspect he would merrily concede anyway. I hope to see him making some bangs and flashes at Cheltenham tomorrow - after this.
___________________________________________________________
In his new novel The Chemistry of Tears, author Peter Carey displays his deep interest in science. The book alludes to the mechanical inventiveness that sustained the Industrial Revolution, and makes much reference to Charles Babbage’s proto-computer the Difference Engine and to modern scientific analysis of historical artifacts. (The chemistry of tears is given a fleeting nod too.) Having met Carey recently, I know how keen he is to get the science correct. So I hope he won’t be too mortified to discover that he has used ‘silicon’ when he clearly meant ‘silicone’.

Did I feel the thrill of superiority at noticing this? On the contrary, I felt cross on Carey’s behalf, for what could be more idiotic and confusing than giving a chemical compound a name that is all but indistinguishable in spelling and sound from a chemical element? This has long topped my list of Bad Chemical Names. It’s not even as though there is much excuse. When Frederick Kipping, an excellent synthetic chemist at the University of Nottingham, began making organosilicon compounds, including polymeric siloxanes, using Grignard reagents around the turn of the century, he was keen to develop an analogy between carbon compounds and what seemed to be their silicon analogues. For that reason he called the long-chain diphenylsiloxane Ph2SiO that he made in 1901 a ‘silicone’ because its molecular formula was analogous to that of the ketone benzophenone Ph2CO. Yet it was already clear that the silicon compound was polymeric and that there was no chemical analogy to ketones [1]. Now we’re lumbered with Kipping’s confounding name.

It’s not hard to find other examples, and drugs are some of the worst offenders. This, however, is a tough one. There are so many to give names to, and you don’t want them to be totally arbitrary. Yet do they have to be quite so un-euphonious? I don’t hold out any prospect that my wife will ever pronounce ibuprofen properly, and the only reason I do so is that I have acquired the chemist’s pedantry for complex nomenclature. I know that the chemical reasoning here is sounder: it is a contraction of isobutyl propanoic phenolic acid. But it makes you wonder whether some people still get their analgesia from aspirin simply because they can pronounce it at the pharmacist’s.

The same goes for countless other generic drug names: clopidogrel, lansoprazole, bevacizumab, venlafaxine. The brand names are hardly masterful neologisms, sounding more like characters in a bad science fantasy novel, but at least they tend to roll off the tongue: Crestor, Effexor, Valtrex. Of course, the IUPAC names of these compounds are far worse for the lay person, but they are never intended for lay use, and they are tightly constrained by their information content. For generic names, we do have some choice.

These aren’t totally arbitrary, however – there is some method in the madness. A drug’s generic (or ‘international nonproprietary’) name is ultimately fixed by the World Health Organization, but many are first prescribed by the US Adopted Names (USAN) Council, which has its own guidelines. In particular, the stem of the name denotes the effect or mode of action: -axine drugs are antidepressants that inhibit uptake of particular neurotransmitters, -vir means an antiviral, -mab is a monoclonal antibody, and so on. Some prefixes and other syllables have particular meanings – lev- and dex- are clearly stereoisomers, for example – but most don’t. USAN aims to avoid names that non-English speakers will find hard to pronounce, as well as ones that turn out to have obscene connotations in other languages, so there are no equivalents of the wonderful arsole.

Despite this logic, is it really just familiarity that separates codeine and paracetamol from atorvastatin and montelukast? Faced with these agglomerations of semi-arbitrary syllables, one has to wonder if half a system is worse than no system at all. The proliferation of brand names only makes matters worse; I had no idea until I looked that taxol is also known as onxol, abraxane and cryoxet. I shouldn’t even call it taxol, of course, since Bristol-Myers Squibb got very upset when its brand name was used instead of the generic paclitaxel. While plenty of brand names have become common names through familiarity –(think of Kevlar), this was the reverse: taxol was widely used by chemists before Bristol-Myers Squibb registered it as a trademark, provoking dismay at their appropriation of established usage [2].

Whatever the legal issues, the fact is that taxol works as a name: anyone can say it without effort and not confuse it with something else. With graphene, fullerenes and dendrimers, scientists have shown that they can sometimes master the trick of balancing euphony, descriptiveness and specificity in chemical naming. But there’s still cause for entreating that, before you christen your compound, think how it will sound in Boots.