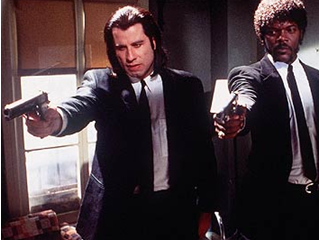 Vincent (Travolta): "Antwan probably didn't expect Marsellus to react like he did, but he had to expect a reaction".
Jules: "It was a foot massage, a foot massage is nothing, I give my mother a foot massage."

Computer scientists Cristian Danescu-Niculescu-Mizil and Lillian Lee of Cornell University in Ithaca, New York, see the way Jules repeats the word 'a' used by Vincent as a key example of 'convergence' in language. "Jules could have just as naturally not used an article," says Danescu-Niculescu-Mizil. "For instance, he could have said: 'He just massaged her feet, massaging someone's feet is nothing, I massage my mother's feet.'"

The duo show in a new study that such convergence, which is thought to arise from an unconscious urge to gain social approval and to negotiate status, is common in movie dialogue. It "has become so deeply embedded into our ideas of what conversations 'sound like' that the phenomenon occurs even when the person generating the dialogue [the scriptwriter] is not the recipient of the social benefits", they say.

“For the last forty years, researchers have been actively debating the mechanism behind this phenomenon”, says Danescu-Niculescu-Mizil. His study, soon to be published in a workshop proceedings [1], cannot yet say if the ‘mirroring’ tendency is hard-wired or learnt, but it shows that it does not rely on the spontaneous prompting of another individual and the genuine desire for his or her approval.

“This is a convincing and important piece of work, and offers valuable support for the notion of convergence”, says philologist Lukas Bleichenbacher at the University of Zurich in Switzerland, a specialist on language use in the movies.

The result is all the more surprising given that movie dialogue is generally recognized to be a stylized, over-polished version of real speech, serving needs such as character and plot development that don’t feature in everyday life. “The method is innovative, and kudos to the authors for going there”, says Howie Giles, a specialist in communication at the University of California at Santa Barbara.

"Fiction is really a treasure trove of information about perspective-taking that hasn't yet been fully explored," agrees Molly Ireland, a psychologist at the University of Texas at Austin. "I think it will play an important role in language research over the next few years."

But, Giles adds, "I see no reason to have doubted that one would find the effect here, given that screenwriters mine everyday discourse to make their dialogues appear authentic to audiences".

That socially conditioned speech becomes an automatic reflex has long been recognized. “People say ‘oops’ when they drop something”, Danescu-Niculescu-Mizil explains. “This probably arose as a way to signal to other people that you didn't do it intentionally. But people still say ‘oops’ even when they are alone! So the presence of other people is no longer necessary for the ‘oops’ behaviour to occur – it has become an embedded behavior, a reflex.”

He and Lee wanted to see if the same was true for conversational convergence. To do that, they needed the seemingly unlikely situation in which the person generating the conversation could not expect any of the supposed social advantages of mirroring speech patterns. But that’s precisely the case for movie script-writers.

So the duo looked at the original scripts of about 250,000 conversational exchanges in movies, and analysed them to identify nine previously recognized classes of convergence.

They found that such convergence is common in the movie dialogues, although less so than in real life – or, standing proxy for that here, in actual conversational exchanges held on Twitter. In other words, the writers have internalized the notion that convergence is needed to make dialogue ‘sound real’. “The work makes a valid case for the use of ‘fictional’ data”, says Bleichenbacher.

Not all movies showed the effect to the same extent. “We find that in Woody Allen movies the characters exhibit very low convergence”, says Danescu-Niculescu-Mizil – a reminder, he adds, that “a movie does not have to be completely natural to be good.”

Giles remarks that, rather than simply showing that movies absorb the unconscious linguistic habits of real life, there is probably a two-way interaction. “Audiences use language devices seen regularly in the movies to shape their own discourse”, he points out. In particular, people are likely to see what types of speech ‘work well’ in the movies in enabling characters to gain their objectives, and copy that. “One might surmise that movies are the marketplace for seeing what’s on offer, what works, and what needs purchasing and avoiding in buyers own communicative lives”, Giles says.

Danescu-Niculescu-Mizil hopes to explore another aspect of this blurring of fact and fiction. “We are currently exploring using these differences to detect ‘faked’ conversations”, he says. “For example, I am curious to see whether some of the supposedly spontaneous dialogs in so-called ‘reality shows’ are in fact all that real.”

I received some interesting further comments on the work from Molly Ireland, which I had no space to include fully. They include some important caveats, so here they are:

I think it's important to keep in mind, as the authors point out, that fiction can't necessarily tell us much about real-life dialog. Scripts can tell us quite a bit about how people think about real-life dialog though. Fiction is really a treasure trove of information about perspective-taking that hasn't been fully explored in the past. Between Google books and other computer science advances (like the ones showcased in this paper), it's become much easier to gain access to millions of words of dialog in novels, movies, and plays. I think fiction will play an important role in language and perspective-taking research over the next few years.

Onto their findings: I'm not surprised that the authors found convergence between fictional characters, for a couple of reasons. They mention Martin Pickering and Simon Garrod's interaction alignment model in passing. Pickering and Garrod basically argue that people match a conversation partner's language use because it's easier to reuse language patterns that you've just processed than it is to generate a completely novel utterance. Their argument is partly based on syntactic priming research that shows that people match the grammatical structures of sentences they've recently been presented with – even when they're alone in a room with nothing but a computer. So first of all, we know that people match recently processed language use in the absence of the social incentives that the authors mention (e.g., affection or approval).

Second, all characters were written by the same author (or the same 2-3 authors in some scripts). People have fairly stable speaking styles. So even in the context of scriptwriting, where authors are trying to write distinct characters with different speaking styles, you would expect two characters written by one author with one relatively stable function word fingerprint to use function words similarly (although not identically, if the author is any good).

The authors argue that self-convergence would be no greater than other-convergence if these cold, cognitive features of language processing [the facts that people tend to (a) reuse function words from previous utterances and (b) consistently sound sort of like themselves, even when writing dialog for distinct characters] were driving their findings. That would only be true if authors failed to alter their writing style at all between characters. Adjusting one's own language style when imagining what another person might say probably isn't conscious. It's probably an automatic consequence of taking another person's perspective. An author would have to be a pretty poor perspective-taker for all of his characters to sound exactly like he sounds in his everyday life.

Clearly I'm skeptical about some of the paper's claims, but I would be just as skeptical about any exploration into a new area of research using an untested measure of language convergence (including my own research). I think that the paper's findings regarding sex differences in convergence and differences between contentious and neutral conversations could turn out to be very interesting and should be looked at more closely – possibly in studies involving non-experts. I would just like to look into alternate explanations for their findings before making any assumptions about their results.
Posted by Philip Ball at 9:30 AM

Didn't 'Nature' use to be a science journal, before it became an magazine for the 'North Londongrad Republic'?