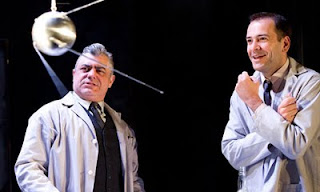 It is a curious year of anniversaries for the former Soviet military-industrial complex. Fifty years ago the cosmonaut Yuri Gagarin became the first person in space, orbiting the world for 108 minutes in the Vostok spacecraft. And 25 years ago, Reactor 4 of the Chernobyl nuclear plant exploded and sent a cloud of radioactive debris across northern Europe.

One triumph, one failure; each has been marked independently. But while Little Eagles, Rona Munro’s play commissioned by the Royal Shakespeare Company for the Gagarin anniversary, understandably makes no mention of the disaster in Ukraine a quarter of a century later, the connections assert themselves throughout. Most obviously, both events were the fruits of the Cold War nuclear age. The rockets made by Sergei Korolyov, the chief architect of the Soviet space programme and the play’s central character, armed President Khrushchev with intercontinental ballistic missiles before they took Gagarin to the stars.

But more strikingly, we see the space programme degenerate along the same lines that have now made an exclusion zone of Chernobyl. Impossible demands from technically clueless officials and terror at the consequences of neglecting them eventually compromise the technologies fatally – most notably here in the crash of Soyuz 1 in 1967, killing cosmonaut Vladimir Komarov. Gagarin was the backup pilot for that mission, but it was clear that he was by then too valuable a trophy ever to be risked in another spaceflight. All the same, he died a year later during the routine training flight of a jet fighter.

Callous disregard for life marks Munro’s play from beginning to end. We first see Korolyov in the Siberian labour camp where he was sent during Stalin’s purge of the officer class just before the Second World War. As the Soviets developed their military rocket programme, the stupidity of sending someone so brilliant to a virtual death sentence dawned on the regime, and he was freed to resume work several years later. During the 1950s Korolyov wrested control of the whole enterprise, becoming known as the Chief Designer.

Munro’s Korolyov seems to offer an accurate portrait of the man, if the testimony of one of his chief scientists is anything to go by: “He was a king, a strong-willed purposeful person who knew exactly what he wanted… he swore at you, but he never insulted you. The truth is, everybody loved him.” As magnetically played by Darrell D’Silva, you can see why: he is a swaggering, cunning, charming force of nature, playing the system only to realise his dream of reaching the stars. He clearly reciprocates the love of his ‘little eagles’, the cosmonauts chosen with an eye on the Vostok capsule’s height restrictions.

But for his leaders, rocketry was merely weaponry, or a way of demonstrating superiority over their foes in the West. Korolyov becomes a hero for beating the Americans with Sputnik, and then with Vostok. But when the thuggish, foul-mouthed Khrushchev (a terrifying Brian Doherty) is retired in 1964 in favour of the icily efficient Leonid Brezhnev, the game changes. The new leader sees no virtue in Korolyov’s dream of a Mars mission, and is worried instead that the Americans will beat them to the moon. The rushed and bungled Soyuz 1, launched after Korolyov’s death in 1966, was the result.

Out of this fascinating but chewy material, Munro has worked wonders to weave a tale that is intensely human and, aided by the impressive staging, often beautiful and moving. Gagarin’s own story is here a subplot, and not fully worked through – we start to see his sad descent into the vodka bottle, grounded as a toy of the Politburo, but not his ignominious end. There is just a little too much material here for Munro to shoehorn in. But that is the only small complaint in this satisfying and wise production.

What it becomes in the end is a grotesque inversion of The Right Stuff, Tom Wolfe’s account of the US space programme made into an exhilarating movie in 1983. Wolfe’s celebration was a fitting tribute to the courage and ingenuity that ultimately took humans to the moon, but an exposure of the other side of the coin was long overdue. There is something not just awful but also grand and awesome in the grinding resolve of the Soviets to win the space race relying on just the Chief Engineer “and convicts and some university students”, as Korolyov’s doctor puts it.

Little Eagles shows us the mix of both noble and ignoble impulses in the space race that the US programme, with its Columbus rhetoric, still cannot afford to acknowledge. It recognizes the eye-watering glory of seeing the stars and the earth from beyond the atmosphere, but at the same time reveals the human spaceflight programmes as utterly a product of their tense, cheat-beating times, a nationalistic black hole for dollars and roubles (and now, of yuan too). Crucially, it leaves the final judgement to us. “They say you changed the whole sky and everything under it”, Korolyov’s doctor (and conscience) says to him at the end. “What does that mean?”
Posted by Philip Ball at 11:14 AM

How our heroes take on different shapes and sounds.

When Hitler's forces swept through Russia, killing and capturing millions of soldiers in just a few months; in an attack more surprising to Stalin, than Pearl Harbour was to Roosevelt, the little Khrushchev, virtually single-handedly, organised the removal of many industrial complexes and their valuable machine tools, to the Urals for safety.

Strategically speaking, Khrushchev would qualify as one of the contenders of the title: "The man that saved the world from Hitler".

How different our world would be today, if the thuggish, foul-mouthed Khrushchev were replaced by a 'nice' guardian reading pinko from North Londongrad:

"Hello comrade, would you mind awfully, movingе that lathe..."

"Right ho, and where do you keep the batteries?"