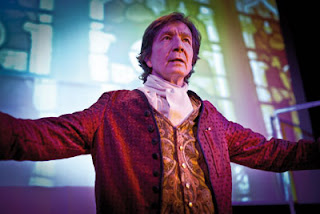 Let Newton Be!
A play by Craig Baxter, directed by Patrick Morris and produced by the Menagerie Theatre Company
Touring until 30 April

Isaac Newton perplexes and fascinates not just because he was a transitional figure in the history of science but because he was a very odd man. The difficulty has been in distinguishing those two things. The temptation to portray him as a man torn between science and religion, or flitting from mathematical physics to superstitious alchemy, is the modern legacy of a tradition of positivistic science history that today’s historians are still working to dispel. In his passion for none of these things was Newton particularly unusual in his time. What made him odd was not so much what he believed but how he lived: isolated from intimate relationships, sensitive to every slight, at the same time vain and yet so indifferent to adulation that he could barely be persuaded to write the Principia.

All that, quite apart from his towering status in science, naturally makes him an attractive figure for biographers. Among those who have grappled with his story are the leading science historians Richard Westfall (whose 1980 biography is still the standard reference) and A. Rupert Hall, and the science writer James Gleick. It also supplies fertile soil for more inventive explorations of his life, of which Let Newton Be! is one. This new play by Craig Baxter was commissioned by the Faraday Institute for Science and Religion at Cambridge University, and has benefited from the input of, among others, Rob Iliffe, the head of the Newton Project to place all of Newton's writings online, and the astrophysicist John Barrow.

To conjure up this mercurial man, Baxter elected to use almost entirely Newton’s own words, or those of some of his contemporaries, such as his rival and critic Gottfried Leibniz. Moreover, Newton – the only character in the piece, apart from brief appearances by the likes of Leibniz and Edmond Halley – is played here simultaneously by three actors, one of them a woman. It sounds like a gimmick, but isn’t: the device allows us to see different facets of the man, though happily not as reductively conflicting voices.

The play’s structure is largely chronological. We see Newton as a boy in the family home at Woolsthorpe, an undergraduate at Trinity College Cambridge, then as Lucasian professor of mathematics (appointed in 1669 at the age of 27). We see him take his retractable telescope to the Royal Society and, stung by what he perceived as the antagonism of the London virtuosi, retreat into religious exegesis, until Halley cajoles him to write down his proof of elliptical planetary orbits – a treatise that expands into the Principia. Feted and now somewhat pompous, he becomes Warden of the Royal Mint and the President of the Royal Society.

The original material is well used. There is a reconstruction of Newton’s famous prism experiment (or roughly so – his experimentum crucis of around 1666, when he reconstituted white light from the spectrum, is notoriously difficult to reproduce). But we also get Newton’s sometimes surreal, obsessive lists of sins committed (“I lied about a Louse”), and the only time we are lectured to is in one of the real lectures on optics that Newton was obliged to provide in the Lucasian chair, at which he proves to be hilariously inept.

In such ways, the play delivers an impressive quantity of Newton’s thought. In particular, it sets out to emphasize just how much of his work was religious – as Iliffe confirmed in a post-performance panel discussion, Newton considered this his central mission, with the seminal scientific works on light, motion and gravity being almost tossed off before breakfast. The natural theology that motivated much of the science – the idea that by exploring the natural world we deepen our appreciation of God’s wisdom and power – was the conventional position of most seventeenth-century scientists, most notably Robert Boyle, and was their defence against accusations of materialistic atheism. Newton was anything but a materialist: that his gravity was an occult force acting at a distance was precisely what Leibniz considered wrong with it, while for Newton this force was actively God’s doing.

But I’m not sure how much would be comprehensible to anyone coming new to Newton. It is characteristic of the play’s intelligence that we don’t get any nonsense with falling apples, but neither are we really told what distinguished Newton’s ideas on gravity from the many that went before (especially Descartes’ vortices and the belief that it is a form of magnetism, both of which ideas Newton shared at some point). His work on the additive colour mixing of light is beautifully illustrated but not actually alluded to; likewise his laws of motion. Moreover, the play lacks a real narrative – there is no tension, nothing to be resolved, for in the end it is a biography, however inventively told. But that was, after all, its brief, and it is probably a more enjoyable hour and a half with Newton than anyone ever had in his lifetime.
Posted by Philip Ball at 2:49 AM