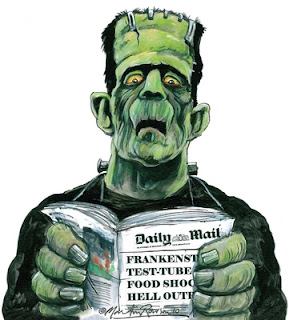 When I wrote recently in New Humanist, apropos of my new book Unnatural, that “It is all too easy for self-appointed moralists who warn that reproductive technologies will lead to Frankenstein monsters and Brave New Worlds – whether they are the Daily Mail, the religiously motivated bioethicists who determined George W Bush’s biomedical policies, or anti-biotechnology crusaders – to tap into familiar, legendary nightmares that foreclose a grown-up debate about how, why and when to regulate the technical possibilities” (the piece was accompanied by the wonderful image above by Martin Rowson), I have to admit that I wasn’t thinking very much about the possibility that the Daily Mail would review Unnatural. But if I had been, I needn’t have worried, for it seems that folks at the Mail have ruthless mental filters that transform words into precisely what they want to hear. And so it is that Christopher Hudson’s extensive review in yesterday’s Mail is amazingly favourable, calling Unnatural a “fascinating and disturbing book”. Never mind that I pick apart the idle journalese of “playing God” – Unnatural is apparently “the story of all the Frankensteins who wanted to play God by creating mankind.” Never mind that my point about Brave New World is that it is not “eerily prophetic” at all. Never mind that the central point of the book (there’s a clue in the title) is to challenge accepted notions of “unnaturalness” – one of the key problems for human cloning is apparently “How can its unnaturalness be overcome?” Hudson says that my book “demonstrates [that cloning] could eventually destroy what it means to us to be a human being.” Well, no; I set out to demonstrate that, whatever cloning might do, it will not in fact be that. I would like to imagine that a lot of Mail readers will be in for a surprise if they buy the book on the back of this review (and please don’t let me stop you); but who knows, maybe they’ll convince themselves into drawing the same conclusions.
“From Frankenstein to clones, how our hunger to play God could be the death of us”, says the standfirst to the review. Now if only they had run it a bit earlier, that would have supplied the perfect headline for the tabloid that Martin’s Creature grasps.
Posted by Philip Ball at 8:53 AM

The Creature was born benign, innocent, and even kind hearted. How could his very creation be Victor's sin when this is taken into account? To say The Creature being made is Victor's crime diminishes Victor's accountability in abandoning him and the world rejecting him.

The creature does some terrible things, yes. Though he learn at an accelerated rate it still leaves him unprepared for his own emotions in the face of the cruelty of the world. He's well spoken, articulate and literate. But for his rate of self-education, his articulation, his love of literature and poetry, he is still a new born. All of his emotions are new to him. His life experiences are all fresh. And as these emotions are new and will seem amplified, intense and no amount of reading can prepare him for the heartache of being human. He's learning.
Yes, he did terrible things in the Frankenstein novel. All of those emotions are new and fresh and no one was there to guide him into them or how to cope with them. And let's be honest, the literature he's reading not only condones vengeance but it also glorifies it. The Creature is over-come with guilt and remorse at the end of the original novel enough so to make him want to destroy himself.

If Victor had not abandoned him, if someone had been there to guide him through his emotional experiences, which he had no way to prepare for, than things would not have turned out as they did. According to Mary Shelley herself, he was kind and later wracked with guilt and remorse when he realized how hollow revenge was and how it only increased his suffering and sense of distance from people.

To say that The Creature should never have existed is to imply that he was destined to be evil to begin with and this is not true. This misconception is often amplified by films and plays having a hanged man or "criminal brain" used to bring The Creature to life. The real tragedy is if you pay attention to the novel you know The Creature was a gentle soul with no one to help him and the "Playing God" / anti-science message tends to under-mine thiss and acts as if he was destined to be evil to begin with which is not at all the case.

The anti-science message is further lost when you consider that The Creature in the novel was not pure science. Victor found the secret of life while reading the work of Agrippa and Paracelsus. A self-proclaimed sorcerer and an alchemist. The method of how The Creature is brought to life is deliberately left vague in the novel. VIctor deliberately did not reveal how he did it to Captain Walton while telling his story.

And finally I come to the title. People say "But Modern Prometheus was the title and that proves it's a 'Don't try to be like The Gods.' story." And I can't help but wonder if these people even know who Prometheus was?

The Greek myths that were about flying too high were the stories of Icarus and the story of Pegasus.

Prometheus was a Titan, not a human being. The Titans ruled before The Gods. Prometheus created human beings. We were his creation. Not Zeus's creations. When Prometheus saw his creations suffering he stole fire to give us light, warmth, and the power of invention. Yes, he was punished for it but even The Greeks didn't like how that myth ended and eventually added a rescue to the story. Mary Shelley's own husband, Percy Shelley wrote Prometheus Unbound as an ironical response to Prometheus Bound. And Mary Shelley gave us The Modern Prometheus. So I ask how can it be about daring to enter the domain of the Gods when Prometheus is actually the creator of the human race? Why do people always forget this?