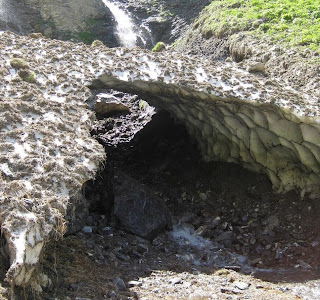 I was recently sent this striking photo of a pattern in melting ice by Georg Warning in Konstanz. He asked if I’d seen anything like it in my research for The Self-Made Tapestry, in which Georg noticed the apparent similarity to my picture of Marangoni convection. That venerable  tome has now been updated as Nature’s Patterns, in which I include a discussion of ice erosion patterns called penitentes, found in the Andes. Penitentes are much more strongly peaked, but it sounds to me as though the early stages of growth might resemble something like this. In the third book of the trilogy (Branches) I say the following:
The snowfields of the Andes experience a kind of erosion process that creates one of nature’s strangest spectacles. The high glaciers here can become moulded into a forest of ice spires, typically between 1 and 4 metres high, called penitentes because of their resemblance to a throng of white-hooded monks. Charles Darwin saw these eerie formations in 1835 en route from Chile to Argentina. ‘In the valleys there were several broad fields of perpetual snow’, he wrote in The Voyage of the Beagle. ‘These frozen masses, during the process of thawing, had in some parts been converted into pinnacles or columns, which, as they were high and close together, made it difficult for the cargo mules to pass. On one of these columns of ice, a frozen horse was sticking as on a pedestal, but with its hind legs straight up in the air. The animal, I suppose, must have fallen with its head downward into a hole, when the snow was continuous, and afterwards the surrounding parts must have been removed by the thaw.’
Darwin remarked that the locals believed them to be formed by wind erosion. But the process is more complicated than that, representing a classic case of pattern formation by self-amplifying feedback. The air at these great heights is so dry that sunlight falling on the ice transforms it straight into water vapour rather than melting it into liquid water. A small dimple that forms in the smooth ice surface by evaporation acts as a kind of lens that focuses the sun’s rays into the centre, and so it is excavated more quickly than the surrounding ice. It’s a little like diffusion-limited aggregation or dendritic growth in reverse: a ‘fingering’ instability penetrates into the ice rather than pushing outwards from the surface.
The process can be accelerated by a fine coating of dirt on the snow surface. As the troughs deepen they expose clean snow that is prone to further evaporation, whereas dirt in the old snow at the peaks covers the ice crystals like a cap and insulates them. You might expect that, on the contrary, snow or ice will melt faster when dirty than when clean, because the darker material will absorb more sunlight. But whether a layer of dirt acts primarily as an insulator or an absorber depends on how thick it is.


That last comment about dirt seems to establish the link, since evidently dirt in the ice traces out the ridges in this case. The underside of this ice bridge is presumably never exposed to the direct rays of the sun, but all the same there is probably some analogous process at play here.
Posted by Philip Ball at 4:07 PM

Perhaps I am mistaken, but could it be that the erosion was caused by a seasonal stream? It seems that the bridge is above a small gorge. If water from rain or ice melt flows there, it could melt the ice (from a glaicer, right?)