A view from the roof at Chartres 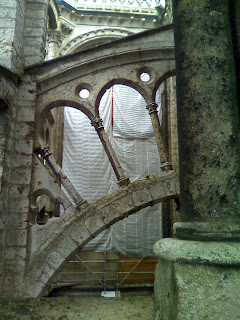 This post is strictly for ultra-nerds of Gothic architecture. I recently got this photo of the ‘transitional flying buttress’ between the nave and choir of Chartres Cathedral – something that is not at all easy to do, as the buttress is not visible from the ground but requires access to the cathedral roof. I’d gone up there for other purposes (a Nova documentary on Gothic churches), and so sadly hadn’t come properly prepared to take photos – this one is from my mobile phone, and so is not of high resolution. But I want to put it up here in case anyone else should ever want to use it without the hassle of getting permission to go up on the roof. The structure is significant because it challenges the idea that the nave is older than the choir. The arches of the nave flyers are in a more squat and massive style, with rounded arches, which could be taken as a sign that they were built first, perhaps by a different master, with the slender pointed arches of the choir flyers (more ‘Gothic’, one might say) being added by a later hand. That was the case argued by Louis Grodecki in the 1950s. But this sole ‘transitional’ flying buttress on the east of the transepts seems to be an attempt to merge the different styles of the nave and choir, as though this was part of the plan all along – perhaps, as Jan van der Meulen suggests, the crossing and transepts were built first, and both the nave and choir built out from them at much the same time. All this is discussed in my book Universe of Stone.

It amazes me that people back then took the time and effort to make things beautiful, even structural elements up on a roof where very few people would be there to see them. How could they have known that people of the future would have cell phone cameras to help the rest of us appreciate their craftsmanship?

They knew, of course, that God's camera was never turned off.
Mind you, one has to take care not to overplay this: the contemporary masons at York Minster assure me that there wasn't a complete aversion to cutting corners...

I haven't read your book Universe of Stone (I'm looking forward to doing so) so I trust you'll forgive me if it already covers the following:

The different phases of building Chartres and other cathedrals can be partly understood by recognising that different master masons carried around their own 'personal' units of measure. By analysing the linear dimensions of the cathedral it is possible to group them according to their conformance to a common underlying module (HCF, I suppose). Nice idea. But is it true ?

I recall this from a lecture on Chartres that I heard some years ago. I can't recall who gave it - Keith Critchlow perhaps, but I think it was someone else.

How were you able to discover that place, Philip? It would be more interesting if you took more photos of it from different angles! Gothic architecture really has a great appeal to people's emotions. Even those who are not into gothic architecture will be suddenly amazed by it, especially if they see it in person.

Thanks for sharing helpful information..

I have found this article very exciting. Do you have any others on this topic? I am also sending it to my friend to enjoy your writing style. Thanks
Online Shopping in Karachi

That's wonderful stuff you've written up here. Been searching for it all around. Great blog.
Uk Coursework Help

This is a great inspiring .I am pretty much pleased with your good work. You put really very helpful information. I am looking to reading your next post.
Paper Writing Service.

Likes enormously increase the recognition of the respective webpage and although utilizing the good vary depend; plenty of people today are going to be attracted to your account. The organizations that provide these professional services, likes on instagram will supply you with non-automated or robotic likes and provide you with true Instagram likes. The great issue about this is the fact that these are swiftly delivered on the account in order that you do not need to attend that substantially. And when you are a little small business, rising your Instagram likes might be advantageous.