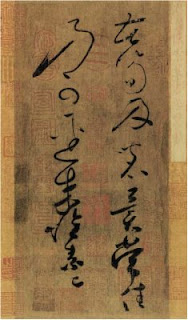 Fractal calligraphy
Everyone got very excited several years ago when some guys claimed that Jackson Pollock’s drip paintings were fractals (R. P. Taylor et al., Nature 399, 422; 1999). That claim has come under scrutiny, but now it seems in any case that, as with everything else in the world, the Chinese were there first long ago. Yuelin Li of Argonne National Laboratory has found evidence of fractality in the calligraphy of Chinese artists dating back many hundreds of years (paper here). In particular, he describes the fractal analysis of a calligraphic letter by Huai Su, one of the legendary figures of Chinese calligraphy (Li calls him a ‘maniac Buddhist monk’, an image I rather enjoyed). Huai Su’s scroll, which hangs in the Shanghai Museum, says “Bitter bamboo shoots and tea? Excellent! Just rush them [over]. Presented by Huai Su.” (See image above: you’ve got to admit, it beats a text message.)

So what, you might be tempted to say? Isn’t this just a chance consequence of the fragmented nature of brush strokes? Apparently not. Li points out that Su seems to have drawn explicit inspiration from natural fractal objects. A conversation with the calligrapher Yan Zhenqing, recorded in 722 CE, goes as follows:

Zhenqing asked: ‘Do you have your own inspiration? Su answered: ‘I often marvel at the spectacular summer clouds and imitate it… I also find the cracks in a wall very natural.’ Zhenqing asked: ‘How about water stains of a leaking house?’ Su rose, grabbed Yan’s hands, and exclaimed: ‘I get it!’

‘This conversation’, says Li, ‘has virtually defined the aesthetic standard of Chinese calligraphy thereafter, and ‘house leaking stains’ and ‘wall cracks’ became a gold measure of the skill of a calligrapher and the quality of his work.’
Posted by Philip Ball at 1:13 AM