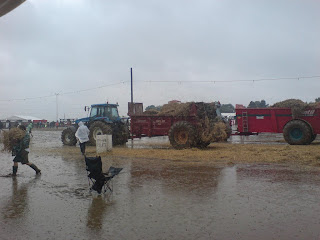 It’s a rotten cliché of a title, but you can’t avoid the irony when the scene was pretty much like that above – I don’t know if this picture was taken this year or some previous year, but it sums up the situation at the Hay Literary Festival on Sunday and Monday this week. (Looking outside, things may not have got much better.) Strangely, this didn’t matter. One great thing about Hay is that it takes place in a complex of tents connected by covered walkways, so you can stroll around and stay dry even if it is pelting down. It was cold enough to see your breath at midday, but no one seemed to be complaining, and the crowds kept coming. These Guardian readers are hardier folk than you might think.

The mud was another matter. The authors’ car park was a lake, so there was no avoiding a trek through a reconstruction of the Somme. We came with a silver-grey car; now it has the colour and texture, if not quite the smell, of a farmyard. Note to self: take wellies next time.

Still, fun for all. Good food, no plague of cheap commercialism, and a fantastic setting even if you can’t see it through the driving rain. I was there with my family, so had limited opportunity to catch talks, but I was impressed by David King’s passionate determination to get beyond the rearranging-deckchairs approach to climate change. As David is in a position to make things happen, this is good news for us all. In particular, he advocates a massive increase in funding of research to make solar energy affordable enough to be a routine aspect of new building, enforced by legislation. David sometimes gets flak from environmental groups for not going far enough (not to mention his endorsement of nuclear power), but he is far more outspoken and committed than many, if not most, of the scientists in such positions of influence. I must admit that when David was appointed Chief Scientific Adviser, I took the simplistic view that he is a nice chap and a good scientist but that heterogeneous catalysis seemed an awfully long way from policy advising. Eat those words, lad – he’s shown exactly how a scientific adviser can make a real difference on important issues.

He was there primarily to talk about his book on climate change with Gabrielle Walker, The Hot Topic. But he and I, along with Steve Jones, sat on a discussion panel for Radio 4’s Material World, recorded in front of the Hay audience for broadcast on Thursday 29 May (listen out for the rain pelting on canvas). We talked about what happens to science when it intersects with broader culture – yes, vague huh? While my co-panellists are old hands at finding incisive responses to whatever is thrown at them, I sometimes felt that I was mouthing platitudes. No doubt the capable MW team will have edited it down to a model of eloquence.

But my main excuse for lounging in the artists’ luxurious Green Room (i.e. it had heating and a more or less dry carpet) was that I was talking about my book on Chartres cathedral, Universe of Stone – as it turned out, to an improbably large audience in the cinema tent. Perhaps they thought that ‘Universe of Stone’ was a blockbuster movie. (And maybe it should be – good title, no?) Anyway, they were very kind, and made me want to go back.
Posted by Philip Ball at 9:17 AM