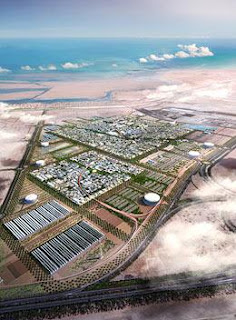 Can a ‘green city’ in the Middle East live up to its claims?
[Here’s my latest piece for Nature’s Muse column.]

The United Arab Emirates has little cause to boast of green credentials, but that shouldn’t make us cynical about its new eco-city.

When Israel’s first prime minister David Ben-Gurion proclaimed his ambition to “make the desert bloom”, he unwittingly foreshadowed one of the enduring sources of controversy and tension in this beleaguered region of the Middle East. His comment has been interpreted by some as a signal of the centrality of water to political power in a parched land – and without doubt, Israel’s armed conflicts with its neighbours have been fought in part over control of water resources.

But Ben-Gurion’s remark also prompts the question of what it really means to make a desert bloom. To critics, one of those meanings involves an inappropriate transposition of a temperate lifestyle to a water-short land. Wasn’t the ‘desert’, which for centuries supported grain, fruit and olive groves, already ‘blooming’ in the most suitable way? Does ‘blooming’ entail golf courses and verdant public parks sucking up precious water?

In other words, there’s something of a collision of imagery in talk of ‘going green’ in an arid climate, where literal greenness imposes a huge burden on resources. That’s now highlighted as plans to create an ambitious ‘green city’ near Abu Dhabi in the United Arab Emirates (UAE) get underway.

Masdar City is slated to cost $22 bn, and the government of the UAE hopes that by 2018 it will be home to around 15,000 people, and a workplace for 50,000. Yet it will have no cars, will run on solar energy, and will produce no carbon emissions or other waste.

Concerns have been raised about whether this will just be an oasis for the rich, with all the incongruous trappings of luxury evident elsewhere in the UAE, where the wealthy can play golf on lush greens and even ski on immense indoor slopes covered with artificial snow.

Others have dismissed Masdar City as a figleaf to hide the energy profligacy of the UAE, where the carbon footprint per capita is the highest in the world, over five times the global average, and greenhouse gas emissions per capita are exceeded only by Qatar and Kuwait. Cynics might ask whether a little patch of clean energy will do much to alter that.

These are fair questions, but it would be a shame if Masdar City was discredited on this basis alone. Like it or not, we need to take greenness wherever we can find it. We do not need to be naïve about the motives for it, but neither does it help to be too snooty. There is some pragmatic truth in the satirical poem ‘The Grumbling Hive’ published in 1705 by Belgian physician Bernard Mandeville, who argued that private vices can have public benefits: that good may sometimes come from dubious intentions.

One might make the same accusations of a cosmetic function for China’s plans to build a zero-emission city, Dongtan, near Shanghai (although China is more worried about environmental issues than is sometimes acknowledged, recognizing them as a potential constraint on economic growth). One might also point out that the US government’s new-found enthusiasm for clean energy is motivated more by fears of its energy security than by an acceptance of the reality of global warming. But if these things lead to useful innovations that can be applied elsewhere, we would be foolish to turn up our noses at them.

It’s not just energy that is at issue here; water is an equally critical aspect of environmental sensitivity and sustainability in the baking Middle Eastern climate. Here there can be little question that necessity has been the mother of invention that makes the Middle Eastern countries world leaders in water technology. Israel has been criticized in the past for its irresponsible (not to mention inequitable) use of the region’s aquifers, and the ecosystem of the Sea of Galilee has certainly suffered badly from water practices. But Israel has in other ways become a pioneer in wise water-use schemes, particularly desalination and sewage farming. The latter reduces the strain on water systems relative to the way that some other less water-stressed countries moisten the crops with water fit to drink.

It would be good to think that there has been some recognition here that even in purely economic terms it is better to find technological solutions to water scarcity than to fight wars over it. The cost of a single F-16 jet fighter is comparable to that of the massive Ashkelon desalination plant in Israel, which produces over 300,000 cubic metres of water a day.

Desalination is a major source of fresh water in the UAE too. The Jebel Ali Desalination Plant, 35 km southwest of Dubai, generates an awesome 300 million cubic metres a year. For Masdar City, on the outskirts of Abu Dhabi City surrounded by sea, desalination is the obvious solution to the water demands of a small population cluster, and the current plans state with almost blithe confidence that this is where the water will come from. That doesn’t seem unfeasible, however. And there is now a wealth of water-resource know-how to draw on from experience elsewhere in the region, such as intelligent use of grey-water recycling.

One of the most attractive aspects of the planned design, however – which will engage the services of British architect Norman Foster, renowned for such feats as the energy-efficient ‘Gherkin’ tower in London – is that it plans to draw on old architectural wisdom as well as new. Without cars (transport will be provided by magnetic light rail), the streets will be narrow like those of older Middle Eastern towns, offering shade for pedestrians. It has long been recognized that some traditional forms of Middle Eastern architecture offer comforts in an energy-efficient manner, for example providing ‘natural’ air conditioning driven simply by convective circulation. It would be good to see such knowledge revived, and indeed Foster has talked of “working with nature, working with the elements and learning from traditional models.”

It seems unlikely that anyone is going to be blindly seduced by the promises of Masdar City – part of the support for the project offered by the World Wildlife Fund seems to involve monitoring progress to ensure that the good intentions are met. Yet we can hope that the lessons it will surely teach can be applied elsewhere.
Posted by Philip Ball at 10:03 AM