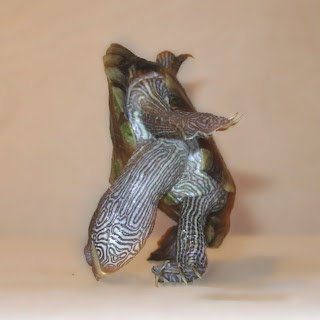 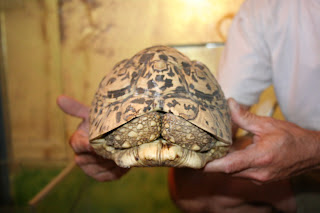 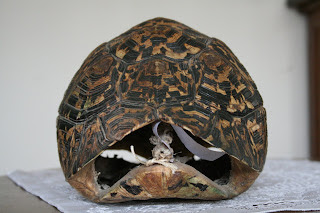 How tortoises turn right-side up
[This is a story I’ve just written for Nature’s news site. But the deadline was such that we couldn’t include the researchers’ nice pics of tortoises and turtles doing their stuff. So here are some of them. The first is an ideal monostatic body, and a tortoise that approximates it. The second is a flat turtle righting itself by using its neck as a pivot. The last two are G. elegans shells, which are nearly monostatic.]

Study finds three ways that tortoises avoid getting stuck on their backs.

Flip a tortoise or a turtle over, and it’ll find its feet again. Two researchers have now figured out how they do it — they use a clever combination of shell shape and leg and neck manoeuvres.

As Franz Kafka’s Gregor discovered in Metamorphosis, lying on your back can be bad news if you’re cockroach-shaped. Both cockroaches and tortoises are potentially prone to getting stuck on their rounded backs, their feet flailing in the air.

For tortoises, this is more than an accidental hazard: belligerent males often try to flip opponents over during fights for territorial rights. Gábor Domokos of Budapest University of Technology and Economics and Péter Várkonyi of Princeton University in New Jersey took a mathematical look at real animals to see whether they had evolved sensible shapes to avoid getting stuck [1].

The ideal answer would seem to be to have a shell that can’t get stuck at all — one that will spontaneously roll back under gravity, like the wobbly children's toys that “won’t fall down”. Domokos and Várkonyi have investigated the rolling mechanics of idealized shell shapes, and show that in theory, such self-righting shells do exist. They would be tall domes with a cross-section like a half-circle slightly flattened on one side.

The shells of some tortoises, such as the star tortoise Geochelone elegans, come very close to this shape. They can still get stuck because of small imperfections in the shell shape, but it takes only a little leg-wagging to make the tortoise tip over and right itself. The researchers call tall shells that have a single stable resting orientation (on the tortoise's feet) monostatic, denoted as group S1.

The tall and the squat

So, tall shells are generally good for righting with minimal effort, and confer good protection against the jaws of predators. Could this be the best answer for all turtles and tortoises? No real chelonian has a perfectly monostatic shell, which Várkonyi says is probably because tall shells could have disadvantages too: you could be rolled over by wind, for instance. Also, he says, it takes quite a bit of fine-tuning to achieve a truly monostatic shape.

Flatter shells have other advantages: they can, for example, be better for swimming or for use as spade-like implements for digging. The side-necked turtle and the pancake tortoise are flat like this, with two stable resting positions (S2): right side up and on their back.

For such flat shells, righting requires more than a bit of thrashing around. These animals tend to have long necks, which they extend and use as a pivot while pushing with their legs. The longer the neck, the easier it is for the creature to right itself, in the same way that a long lever can be pushed down with less effort than a short one.

Stuck in the middle

In between these two extremes of tall and flat are shells that are moderately domed, as found in Terrapene box turtles. Surprisingly, these have three stable positions (S3): on the back, on the front or halfway between, where the shell rests on its curved side.

Turtles of the S3 class use a combination of both strategies: bobbing of their head or feet tips the shell from the back-down position to the sideways position, and from there the creature can use its neck and feet to pivot over into the belly-down state.

The work is sure to be of interest to tortoise keepers and kids with turtle pets. But it's unlikely that this tortoise-rolling work is going to suggest new ways to help robots pick themselves up — engineers already have a number of quite simple ways of ensuring that. "You can just put ballast in the bottom," Várkonyi admits.