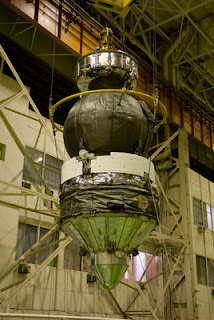 Space experiments should be a cheap shot
[This is the pre-edited version of my latest article for muse@nature.com - with some added comment at the end.]

We rarely learn anything Earth-shaking from space labs, which is why inexpensive missions like Foton-M3 are the way to go.

Space experiments have rarely seemed as much fun as they do on the European Space Agency’s Foton-M3 mission, which blasted off two weeks ago from the Russian launch site at Baikonur in Kazakhstan for a 12-day spell in low-Earth orbit. Among the experiments in the 400-kg payload were an exploration of capsule delivery to Earth using a 30-km space tether, a study of how human balance works and an investigation of whether organic matter in space rocks can withstand the heat of orbital re-entry so that life could be transferred between planets, as posited in the ‘panspermia’ hypothesis, by sticking a chunk of Scottish rock onto the spacecraft’s side.

None of these experiments seems likely be itself to lead to any major new discoveries or technological breakthroughs. And none can be considered terribly urgent – the balance study, which looks at how a balance organ called the otolith grows in larval fish in zero gravity, has been on the shelf for years, the first attempt being one of the minor casualties of the ill-fated Columbia space shuttle mission in early 2003.

But it would be churlish to criticize Foton-M3 for the incremental nature of its science. Most scientific research in general is like that, and the roster of experiments is not only impressively long for such a relatively cheap mission but also appealingly diverse, spanning subjects from microbiology to geoscience to condensed-matter physics.

What’s more, the tether experiment has arisen from a project called the Young Engineers’ Satellite 2 (YES2), involving more than 450 students throughout Europe. The aim is to use a tether to slow down an object falling back into Earth’s gravity from a spacecraft so that it continues falling instead of being captured in orbit. This could offer a cheap way of delivering payloads from space to Earth.

Admittedly the experiment seems not to have quite worked out as planned, because apparently not all the tether unreeled. And the notion of finding a cheap postal method for the indefensibly expensive white elephant known as the International Space Station, which has so far yielded very little worth delivering in the first place, is rather hard to swallow.

But as a way to engage students in serious space research that poses interesting scientific and technological questions and might conceivably find uses in the future, YES2 can’t be faulted.

Foton-M3 does evoke a degree of dèja-vu – how many earlier space experiments have claimed to be “improving our understanding of protein structure by growing protein crystals in weightlessness”, or learning about loss of bone mass in astronauts? But there’s bound to be some duds in over 40 experiments.

What’s curious about some of these is that they threaten to undermine their own justification. If we can design robotic instruments to look at the growth of bone or tissue cells so that we can predict how astronauts might fare on long-term space missions, can we not design robots to replace those very astronauts? Preparing the ground for human space exploration demands such advances in automation that, by the time we’re ready, we’ll have run out of good scientific reasons for it. There may be non-scientific arguments, such as the educational and inspirational value, but a mission like Foton-M3 at least raises doubts about why there is any reason for near-Earth manned spaceflight.

A report by the UK Royal Astronomical Society (RAS) Commission of the Scientific Case for Human Space Exploration, published in 2005, seems to challenge such scepticism. It claimed, for example, that “the capabilities of robotic spacecraft will fall well short of those of human explorers for the foreseeable future.”

But what this turns out to amount to is a statement of the obvious: robots are nowhere near achieving human-like intelligence and decision-making capabilities. There’s no doubt that having humans on site will permit more flexible, faster and more thoughtful responses to unexpected circumstances in lunar or planetary exploration. But since one can probably have ten robotic missions for the price of one manned (and since it might soon take as little as three months to get to Mars), that isn’t obviously a clinching argument, especially when you think about the cost of failure – the success rate for Mars missions is so far not much more than 1 in 4. And robots are, in many ways, considerably more robust than humans.

The RAS report also claimed that “there are benefits for medical science to be gained from studying the human physiological response to low and zero gravity [and] to the effects of radiation.” This claim drew heavily on a letter from the UK Space Biomedicine Group (UKSBG), who one might imagine to be rather disposed to the idea in the first place. They claim that studying bone demineralization in micro- and zero gravity “could dramatically improve the understanding and treatment of osteoporosis.”

That’s why space experiments like those on board Foton-M3 are relevant to the debate. One experiment on the mission looks at precisely this question of bone mass loss using bovine bone; another involves bone-forming and bone-degrading cells cultured in vitro. In other words, one of the key putative health spinoffs of human spaceflight, according to the RAS Commission, is already being studied in cheap unmanned missions. It is conceivable that we would learn something (the UKSBG doesn’t specify what) from live humans that we would not from dead cows, or from live mice or human cell cultures. But should that unknown increment weigh heavily on the scales that the RAS were seeking to balance?

The considerations raised by the RAS report also bear on the question of why it is that such experiments have enjoyed sustained support in the past despite being pretty uninspiring and lacking in real technological payoff. If we think (rightly or wrongly) that it is intrinsically interesting to blast people into space, we’ll tend to feel that way about the stuff they do there too (so that a golf drive in space makes headlines).

Thus, many space experiments, such as the recent demonstration that Salmonella bacteria on the space shuttle Atlantis were more virulent in zero gravity [1], gain interest not because of the results in themselves but because of the very fact of their having been obtained in space. That particular result was already known from microgravity experiments on Earth, and in any event much of the interest centred on whether it means astronauts will suffer more from germs. The glamour that seems to attach to space experiments almost invariably distorts the import of what they find, all the more so because they are used as their own justification: “look at what space experiments can tell us about stuff that happens in space!”

As a result, Foton-M3 provides a nice illustration of proper cost-benefit thinking. The ‘panspermia’ tests, say, operated by a team from the University of Aberdeen, will at best provide a useful addition to a wealth of previous studies on space- and impact-resistance of organic matter and living organisms. A study of temperature and concentration fluctuations in fluids provides a nice verification of a result that was generally expected theoretical grounds – it is the kind of experiment that would be undertaken without hesitation if it could be done in a lab, but which would certainly not warrant its own dedicated space mission.

In other words, when Foton-M3 plummeted back down to Earth near the Russian/Kazakh border on Wednesday [26 September], it should have blown a big hole in starry-eyed visions of space experimentation. This is how it should really be done: modest but intrinsically interesting investigations, realised at a modest cost, and performed by robots.

The more I think about it, the worse the RAS report seems. When it comes to space exploration generally, they do a fair job of taking into consideration the fact that robots can be guided remotely by human intelligence, and don’t need to be autonomous decision-makers. But even this was rather specious in its use of deep-sea engineering as a means of comparison – getting humans to the sea floor, and the hazards they face there, hardly compares with sending them to Mars. When, however, the discussion turned to biomedical spinoffs, the RAS Commission seemed to forget all about doing things robotically – they simply pleaded lack of expertise, which meant they seemingly relied entirely on the testimonies of the UKSBG and human spaceflight advocate Kevin Fong. At no point do they seem to ask whether the biomedical benefits proposed might be obtained equally in unmanned missions. As far as osteoporosis goes, for example, the question is not whether manned spaceflight might tell us something about it but whether:
1. there are critical questions about the condition that can be answered only by micro- or zero-gravity studies; and
2. these questions can only be answered by studying live human subjects and not animals or cell cultures.
The UKSBG point to no such specific questions, and I rather doubt that they could. (Certainly, it is not as though we need to study astronauts in order to monitor human bone mass loss in vivo.) If there are not good answers to these points, the RAS should not be using this line as a reason for human space exploration (as opposed to stuff you might as well do if you’re going up there anyway).
It’s the same story for the work on Salmonella that I mention. There are vague promises of improved understanding of the emergence of virulent strains on Earth, but no indication of why a space experiment will really tell you much more in this regard than a terrestrial simulation of zero G. Much of the interest seems to centre on the question of whether astronauts would face nastier bugs, which of course becomes an issue only if you put them up there in the first place. This is the kind of fuzzy thinking that defenders of human space exploration get away with all the time.