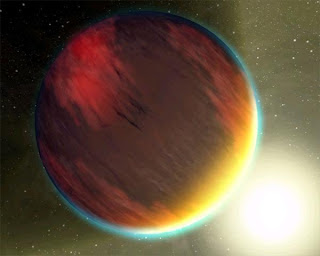 Tales of the expected

[This is the pre-edited version of my latest Muse article for Nature online news.]

A recent claim of water on an extrasolar planet raises broader questions about how science news is reported.

“Scientists discover just what they expected” is not, for obvious reasons, a headline you see very often. But it could serve for probably a good half of the stories reported in the public media, and would certainly have been apt for the recent reports of water on a planet outside our solar system.

The story is this: astronomer Travis Barman of the Lowell Observatory in Flagstaff, Arizona, has claimed to find a fingerprint of water vapour in the light from a Sun-like star 150 light years away as it passes through the atmosphere of the star’s planet HD 209458b [T. Barman, Astrophys. J. in press (2007); see the paper here].

The claim is tentative and may be premature. But more to the point, at face value it confirms precisely what was expected for HD 209458b. Earlier observations of this Jupiter-sized planet had failed to see signs of water – but if it were truly absent, something would be seriously wrong with our understanding of planetary formation.

The potential interest of the story is that water is widely considered by planetary scientists to be the prerequisite for life. But if it’s necessary, it is almost certainly not sufficient. There is water on most of the other planets in our solar system, as well as several of their moons and indeed in the atmosphere of the Sun itself. But as yet there is no of sign of life on any of them.

The most significant rider is that to support life as we know it, water must be in the liquid state, not ice or vapour. That may be the case on Jupiter’s moons Europa and Callisto, as it surely once was (and may still be, sporadically) on Mars. But in fact we don’t even know for sure that water is a necessary condition for life: there is no reason to think, apart from our unique experience of terrestrial life, that other liquid solvents could not sustain living systems.

All of this makes Barman’s discovery – which he reported with such impeccable restraint that it could easily have gone unnoticed – intriguing, but very modestly so. Yet it has been presented as revelatory. “There may be water beyond our solar system after all”, exclaimed the New York Times. “First sign of water found on an alien world”, said New Scientist (nice to know that, in defiance of interplanetary xenophobia, Martians are no longer aliens).

As science writers are dismayingly prone to saying sniffily “oh, we knew that already”, I’m hesitant to make too much of this. It’s tricky to maintain a perspective on science stories without killing their excitement. But the plain fact is that there is water in the universe almost everywhere we look – certainly, it is a major component of the vast molecular clouds from which stars and planets condense.

And so it should be, given that its component atoms hydrogen and oxygen are respectively the most abundant and the third most common in the cosmos. Relatively speaking, ours is a ‘wet’ universe (though yes, liquid water is perhaps rather rare).

The truth is that scientists work awfully hard to verify what lazier types might be happy to take as proven. Few doubted that Arthur Eddington would see, in his observations of a solar eclipse in 1919, the bending of light predicted by Einstein’s theory of general relativity. But it would seem churlish in the extreme to begrudge the headlines that discovery generated.

Similarly, it would be unfair to suggest that we should greet the inevitable sighting of the Higgs boson (the so-called ‘God’ particle thought to give other particles their mass) with a shrug of the shoulders, once it turns up at the billion-dollar particle accelerator constructed at CERN in Geneva.

These painstaking experiments are conducted not so that their ‘success’ produces startling front-page news but because they test how well, or how poorly, we understand the universe. Both relativity and quantum mechanics emerged partly out of a failure to find the expected.

In the end, the interest of science news so often resides not in discovery but in context: not in what the experiment found, but in why we looked. Barman’s result, if true, tells us nothing we did not know before, except that we did not know it. Which is why it is still worth knowing.
Posted by Philip Ball at 11:52 AM