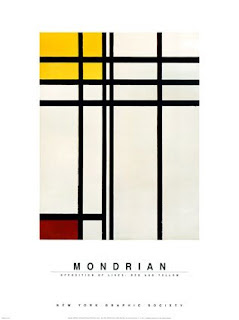 Can you tell true art from fake?

Well, find out. Mikhail Simkin at UCLA (whose work on 'false citations' in the scientific literature is highly revealing about the laxity that exists in checking sources) has put a test online in which you are invited to distinguish between some paintings by Modernist 'greats' such as Klee, Mondrian and Malevich, and "ridiculous fakes" that Simkin has mocked up. So far, over fifty thousand people have taken the test, and Simkin has now revealed the results. Surprise: on average, people identify about 8 out of 12 pictures correctly. In other words, they do better than random guessing, but not by much.

What does that mean? The cynic would say that it shows that 'modern' art is mostly a matter of the Emperor's new clothes: detach the great names and we often can't tell if we're looking at genius or doodling. That, of course, is a very old story.

But it would also be a simplistic one. Actually, I was surprised by the choices Simkin made for the test. Several of the images are obviously computer-generated. And most of not all of the true 'great works' would be recognized by anyone with a reasonable knowledge of 20th century art. I got one wrong, suspecting a 'fake' to be 'real'. But this didn't mean I was particularly impressed by the fake. Nor am I all that impressed by some of the 'reals'.

And it seems Simkin has a curiously old-fashioned notion of 'modern art', appearing to equate it with Modernist painting that is mostly almost a century old. Why not try the same thing with, I don't know, Hirst or Ofili or Gary Hume (if you insist on making art = painting in the first place)? You might find the same results, but at least they'd feel a bit more relevant.

Besides, are you really judging a Malevich by looking at a small and rather low-quality image on a computer screen?

The key point, though, is that underlying Simkin's test seems to be the notion that 'real art' would be instantly identifiable because it would show great skill, which would somehow render it timeless and universal. I'm not going to rehearse the case against that reactionary position, except to say that the galleries are full of paintings from previous ages rendered with consummate skill that seem to us now to be dull, irrelevant, pointless and conservative (which isn't to say that they are – although they might be – but only that times have moved on). Besides, the quality of art isn't something that is decided by democratic vote. Sorry about that seemingly elitist notion, but it has to be true. If it wasn't, artists might as well give up and abandon the stage to people who paint pretty watercolours.

It is true that the pomposity of the art world needs pricking, and often. Contemporary art often now seems to be awarded greatness by media cravenness, self-promotion, and the vagaries of the Matthew principle (the rich get richer). There's a great deal of silliness about, mostly thanks to the sad infatuation with celebrity that Western culture is passing through (well, I'm an optimist). But replacing critical judgement with vox pop ballots seems likely to merely pander to that, not to challenge it.

All the same, Simkin's paper is great fun to read. I only hope it triggers discussion rather than sneering.
Posted by Philip Ball at 9:37 AM

Anonymous said...
This comment has been removed by a blog administrator.
6:14 PM

To anyone familiar with spotting digital manipulation it is really easy to score 100% in this quiz. The "less organic" looking ones are fake and the rest are real. So it's a poor test, really.