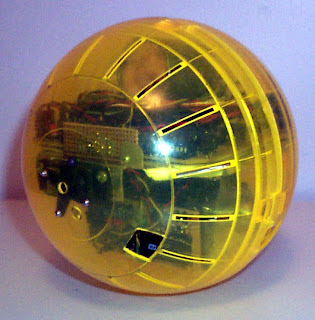 Roll on the robots

This is the pre-edited version of my Materials Witness column for the April issue of Nature Materials.

Spirit, the redoubtable Martian rover, has spent the past year driving on just five of its six wheels. In February the Rover’s handling team said it had perfected the art of manoeuvring with one wheel missing, but the malfunction raises the question of whether there are better ways for robots to get around. Walking robots are becoming more efficient thanks to a better understanding of the ‘passive’ mechanism of human locomotion; but a single tumble might put such a robot out of action permanently in remote or extraterrestrial environments.

So a recent survey of rolling robots provided by Rhodri Armour and Julian Vincent of the University of Bath (J. Bionic Eng. 3, 195-208; 2006) is timely. They point out that spherical robots have several advantages: for example, they’ll never ‘fall over’, the mechanics can all be enclosed in a protective hard shell, the robot can move in any direction and can cope with collisions, uneven and soft surfaces.

But how do you make a sphere roll from the inside? Several answers have been explored in designs for spherical robots. One developed at the Politecnico di Bari in Italy aims to use an ingenious internal driver, basically a sprung rod with wheels at each end. It’s a tricky design to master, and so far only a cylindrical prototype exists. Other designs include spheres with ‘cars’ inside (the treadwheel principle), pairs of hemispherical wheels, moving internal ballast masses – the Roball made at the Université de Sherbrooke in Québec, and the Rotundus of Uppsala University in Sweden – and gyroscopic rollers like Carnegie Mellon’s Gyrover.

But Armour and Vincent suggest that one of the best designs is that in which masses inside the sphere can be moved independently along radial arms to shift the centre of gravity in any direction. The Spherobot under development at Michigan State University, and the August robot designed in Iran use this method, as does the wheel-shaped robot made at Ritsumeikan University in Kyoto, which is a deformable rubber hoop with ‘smart’ spokes that can crawl up a shallow incline and even jump into the air.

Although rolling robots clearly have a lot going for them, it might give us pause for thought that nature seems very rarely to employ rolling. There are a few organisms that make ‘intentional’ use of passive rolling, being able to adopt spherical shapes that are blown by the wind or carried along by gravity: tumbleweed is perhaps the most familiar example, but the Namib golden wheel spider cartwheels down sand dunes to escape wasps, and woodlice, when attacked, curl into balls and roll away. Active rollers are rarer still: Armour and Vincent can identify only the caterpillar of the Mother-of-Pearl moth and a species of shrimp, both of which perform somersaults.

Is this nature’s way of telling us that rolling has limited value for motion? That might be jumping to conclusions; after all, wheels are equally scarce in nature, but they serve engineering splendidly.
Posted by Philip Ball at 3:55 AM