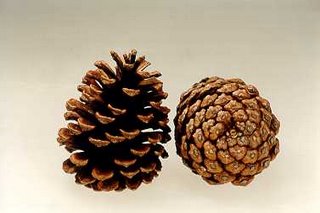 I’m hoping that anyone who feels moved to challenge my dismissal of Fibonacci sequences and the Golden Mean in nature, in the Channel 4 TV series Decoding da Vinci will think first about how much ends up on the cutting-room floor in television studios. I stand by what I said in the programme, but I didn’t suggest to the presenter Dan Rivers that Fibonacci and phi are totally irrelevant in the natural world. Sure, overblown claims are made for them – just about all of what is said in this regard about human proportion is mere numerology (of which my favourite is the claim that the vital statistics of Veronica Lake were Fibonacci numbers). And the role of these numbers in phyllotaxis has been convincingly challenged recently by Todd Cooke, in a paper in the Botanical Journal of the Linnean Society. But even Cooke acknowledges that the spiral patterns of pine cones, sunflower florets and pineapples do seem to have Fibonacci parastichies (that is, counter-rotating spirals come in groups of (3,5), (5,8), (8,13) and so on). That has yet to be fully explained, although it doesn’t seem to be a huge mystery: the explanation surely has something to do with packing effects at the tip of the stem, where new buds form. It’s a little known fact that Alan Turing was developing his reaction-diffusion theory of pattern formation to explain this aspect of phyllotaxis just before he committed suicide. Jonathan Swinton has unearthed some fascinating material on this.

So the real story of Fibonacci numbers and phi in phyllotaxis is complicated, and certainly not something that could be squeezed into five minutes of TV. I shall discuss it in depth in my forthcoming, thorough revision of my book The Self-Made Tapestry, which Oxford University Press will publish as a three volume-set (under a title yet to be determined), beginning some time in late 2007.
Posted by Philip Ball at 2:24 AM