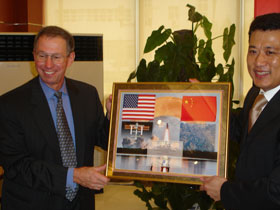 Here’s my latest latest article for muse@nature.com, pondering on the implications of the visit by NASA’s Mike Griffin to China. (There’ll be a few differences due to editing, and this version also has handy links in the text.)

NASA’s visit to China is overdue – the rest of the world got there long ago.

This could be the start of a beautiful friendship. That, at least, is how the Chinese press seems keen to portray the visit this week by NASA’s head Mike Griffin, who is touring Beijing and Shanghai, at the invitation of Chinese president Hu Jintao, to “become acquainted with my counterparts in China and to understand their goals for space exploration.” China Central Television proudly proclaims “China, US to boost space cooperation”, while China Daily reports “China-US space co-op set for lift-off.”

But Griffin himself is more circumspect. “It’s our get-acquainted visit, it’s our exploratory visit and it’s our first date”, he told a press conference, adding “There are differences between our nations on certain key points” – unsurprisingly, for example, the control of missiles. He stressed shortly before the visit that he did not want to “create expectations that would be possibly embarrassing to us or embarrassing to China.”

Griffin’s caution is understandable, since this is after all the first visit by a NASA administrator, and he confessed before the trip that he did not know much about China’s capabilities in space. But why did it take them so long? After all, China has well established joint space projects with Europe, Russia and Brazil, and is one of only three nations to have put people into space.

NASA’s Chinese jaunt is not entirely out of the blue. The administrator of the Chinese National Space Agency (CNSA), Sun Laiyan, visited Griffin’s predecessor Sean O’Keeffe at the end of 2004 on a similar introductory mission, a year after the first Chinese manned spaceflight. US space scientists were given a wake-up call last April when CNSA’s vice administrator Luo Ge revealed the extent of China’s space plans at the National Space Symposium in Colorado. These included the possibility of a manned moon shot.

And the full reality of Chinese capabilities became evident to US congressman Tom Feeney on a visit to China in January as part of Congress’s China Working Group. He and his colleagues saw the Jiuquan satellite launch centre in Gansu province at first hand. “In the United States, we’re training aerospace engineers how to maintain 20 to 40-year old technology”, said Feeley. “The Chinese are literally developing new technology on their own.”

There can be no remaining doubt that China is a serious player in space technology, however much it is a latecomer to the party. Griffin admits that “China has clearly made enormous strides in a very short period”. The ‘can-do’ philosophy apparent in China’s domestic industrial and engineering schemes, pursued with a determination that can appear little short of ruthless, will surely be sounding alarms within the US space industry.

All of which makes it strange that a NASA trip to China has been so long in coming.

Enemy at the gate

The reticence must be due in large measure to the fact that China has long been regarded as a rival rather than a collaborator. China’s desires to become involved in the International Space Station (ISS) have previously been stymied by the USA, for example. In 2001 Dana Rohrabacher, chair the space and aeronautics subcommittee of the House of Representatives, told journalists that he was not interested in Chinese offers to pay for ISS hardware, because of the country’s human-rights record. “The space station’s supposed to stand for something better,” he said, after seeking help from countries including the United Arab Emirates.

The real reasons for a US reluctance to engage with China over space technology must include a considerable dose of Cold War paranoia, especially now that China is emerging as such a strong player. Griffin himself says that Russian involvement with the ISS also initially met with some resistance, although now it’s clear that the space station would have been doomed without it.

The current talks of cooperation do not necessarily signal a lessening of that scepticism, but are possibly boosted by a mixture of realpolitik and economics. Since China is going ahead at full steam with its links to the space programs of Russia and Europe, the US could risk creating a powerful competitor if it doesn’t join in. And preventing US companies from exporting technologies to the most rapidly growing space program in the world threatens to undercut their own competitiveness. In fact, one of the obstacles to such trade is the question of China’s readiness to observe patents and copyrights.

But why has the US position on collaboration with China differed so much from that in Europe? Vincent Sabathier, previously Space Attaché at the French Embassy in the US, says that it comes down to a fundamental difference in attitudes to international relations: the US adopts a ‘realist’ stance based on opposed national interests, while European states have a more liberal approach that favours international dialogue and partnership. “While the US places an emphasis on space power and control, Europe maintains that its focus is on the peaceful use of outer space”, Sabathier says.

This has been reflected in Europe-China collaborations on satellite technology, such as the Galileo global-positioning system, intended for civilian use. Some Americans were unhappy that this threatened the hegemony of the US-controlled Global Positioning System, which has a large military component. The close links between the US space and military programs have hindered trade of its space technologies with China because of military export controls, whereas in Europe the issues are largely decoupled (Europe maintains a rather precarious arms embargo on trade with China). “The US’s isolationist policy forces other space-faring nations, such as Europe, Japan, Russia, India and China, to cooperate among themselves”, Sabathier asserts.

Fears about how China plans to use its space capabilities cannot be wholly dismissed as paranoia, however. China’s defence spending has increased in recent years, although it is notoriously cagey about the figures. Some worry that strengthening its military force is partly a move to intimidate Taiwan – an objective that could be bolstered by satellite technology. The fact remains, however, that China’s young space program doesn’t have the military legacy of NASA, fueled by an entire industry of defence-based aerospace. At this moment, it looks as though China’s space ambitions are driven more by national pride – by the wish to be seen as a technological world leader. That claim is becoming increasingly justified. Rather than worrying about losing technical secrets, China’s space collaborators seem now more likely to gain some handy tips.
Posted by Philip Ball at 12:21 PM

Great blog Philip! I've put a link to it on my site. Thanks for the piece from Prospect on Trident in the earlier blog - I'd missed that. Very good indeed.

"It is not easy to make TNT, as I discovered by boiling toluene and nitric acid to no great effect during a school lunchtime."

Hmmm, maybe you should have taken more care. When I was 17 I made both NG & TNT (only a few grams of each) in the Chemistry Club at school. Didn't half worry the Chem teacher until I'd taken it home tho'...