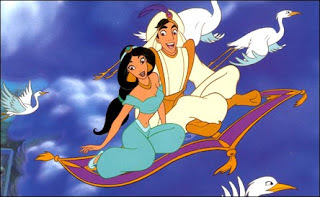 Can Aladdin’s carpet fly?
[Here’s a seasonal news story I just wrote for Nature, which will appear (in edited form) in the last issue of the year. I gather, incidentally, that the original text of the ‘Arabian Nights’ doesn’t specify that the carpet flies as such, but only that anyone who sits on it is transported instantly to other lands.]


A team of scientists in the US and France has the perfect offering for the pantomime season: instructions for making a flying carpet.

The magical device may owe more to Walt Disney than to The Arabian Nights, but it is not pure fantasy, according to Lakshminarayanan Mahadevan of Harvard University, Mederic Argentina of the University of Nice, and Jan Skotheim of the Rockefeller University in New York. They have studied the aerodynamics of a flexible, rippling sheet moving through a fluid, and find that it should be possible to make one that will stay aloft in air, propelled by actively powered undulations much as a marine ray swims through water [1].

No such carpet is going to ferry humans around, though. The researchers say that, to stay afloat in air, a sheet would need to be typically about 10 cm long, 0.1 mm thick, and vibrate at about 10 Hz with an amplitude of about 0.25 mm. Making a heavier carpet ‘fly’ is not absolutely forbidden by physics, but it would require such a powerful engine to drive vibrations that the researchers say “our computations and scaling laws suggest it will remain in the magical, mystical and virtual realm.”

The key to a magic carpet is to create uplift as the ripples push against the viscous fluid. If the sheet is close to a horizontal surface, like a piece of foil settling down onto the floor, then such movements can create a high pressure in the gap between the sheet and the floor. “As waves propagate along the flexible foil, they generate a fluid flow that leads to a pressure that lifts the foil, roughly balancing its weight”, Mahadevan explains.

But as well as lifting it, ripples can drive the foil forward – as any respectable magic carpet would require. “If the waves propagate from one edge”, says Mahadevan, “this causes the foil to tilt ever so slightly and then move in one direction, towards the edge that is slightly higher. Fluid is then squeezed from this end to the other, causing the sheet to progress like a submarine ray.”

To generate a big thrust and thus a high speed, the carpet has to undulate in big ripples, comparable to the carpet's total size. This makes for a very bumpy ride. ”If you want a smooth ride, you can generate a lot of small ripples”, says Mahadevan. “But you’ll be slower.” He points out that this is not so different from any other mode of transport, where speed tends to induce bumpiness while moving more smoothly means moving slower.

"It's cute, it's charming", says physicist Tom Witten at the University of Chicago. He adds that the result is not very surprising, but says "the main interest is that someone would think to pose this problem."

Could artificial flying mini-carpets really be made? Spontaneous undulating motions have already been demonstrated in ‘smart’ polymers suspended in fluids, which can be made to swell or shrink in response to external signals. In September, a team also at Harvard University described flexible sheets of plastic coated with cultured rat muscle cells that flex in response to electrical signals and could exhibit swimming movements [2]. “In air, it should be possible to make moving sheets – a kind of micro hovercraft – with very light materials, or with very powerful engines”, says Mahadevan.

Mahadevan has developed something of a speciality in looking for unusual effects from everyday physics – his previous papers have included a study of the ‘Cheerios effect’, where small floating rings (like the breakfast cereal) stick together through surface tension, and an analysis of the sawtooth shape made by ripping open envelopes with a finger.

“I think the most interesting questions are the ones that everyone has wondered about, usually idly”, he says. “I think that is what it means to be an applied mathematician – it is our responsibility to build mathematical tools and models to help explain and rationalize what we all see.”