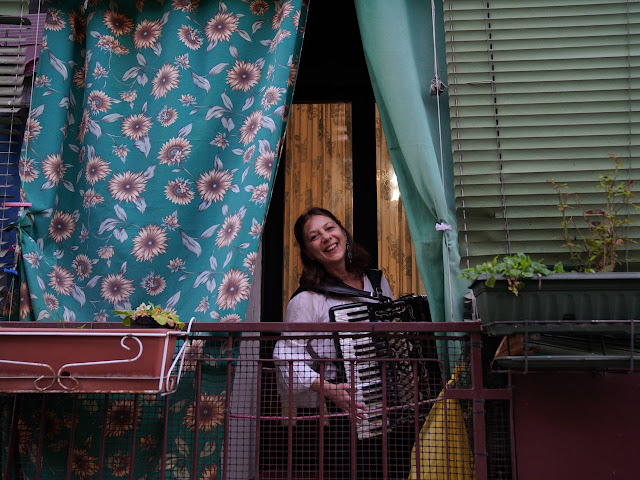 The images of people in Italian cities singing to one another from their balconies during the lockdowns to cope with the Covid-19 pandemic seem to come now from another, kinder era: before the enormity of the international crisis was fully apparent, before the death toll approached a quarter of a million and the sense of social unity had begun to fragment as politicians and others used the situation to sow and exploit division.

Here in Britain we considered that footage of balcony serenades to be gloriously Italianate, feeding into a romantic national stereotype (even if it later happened too in Germany, Spain and Switzerland). But there was in truth something universal about this impulse to turn to music in times of crisis and catastrophe. It has happened everywhere as people struggle to cope with the fears and constraints of the pandemic, offering a cathartic release much as Leonard Slatkin, chief conductor of the BBC Symphony Orchestra, turned to Samuel Barber’s Adagio for Strings to express the right sentiment at the usually celebratory Last Night of the Proms following the 9/11 terrorist attacks in 2001.

What makes music a good vehicle for this role? “In crises”, German musicologist Gunther Kreuz has said, “music has a very strong function to balance people, and show them there is light at the end of the tunnel.” During the pandemic, he says, there were also initiatives involving small ensembles playing in front of care homed for elderly people. One obvious advantage music has in this respect is that it works very well as a socially distanced medium: a kind of communication and contact that remains effective from a distance.

But there is more to it than that, some of which surely relates to the global use of music in ritual and worship. Unlike conversation, music is designed to be broadcast to groups: it allows everyone who hears it to feel addressed individually. That can be true to some extent for the spoken word too – the recital of a poem or sacred text, for example. But the deep value of music for promoting a sense of community, sacredness and emotional connection is precisely that it has no words – or perhaps, for those of us listening to the Italian balcony arias without understanding a word, that the words needn’t matter. Because music shares a great deal with spoken language – the rhythmic and pitch variations, the nested and episodic structure of phrases – it seems to carry meaning without actual semantic content. Each of us is free to create the meaning for ourselves.

At the same time, it penetrates directly to the emotions, in part by a kind of mimicry of human emotional expression but also by stimulating the neural reward pathways that respond to our subconscious anticipation of pattern and regularity. It is this powerful capacity of music for expression of what lies beyond words that led cultural critic Walter Pater to declare that “all art constantly aspires towards the condition of music”. In an age of catastrophe, music becomes more indispensable than ever.
Posted by Philip Ball at 6:14 AM

I love your posts and everything looks wonderful. I love your idea thanks for sharing.
918kiss

I'm very happy to share this little awesome testimony about Dr AZIBA a great Herbal Doctor who helped me Enlarge my Penis size from .3.2 inch to 8.3 inch longer with his African Herbal Product mixture. my wife is so amazed with the autonomous size of my penis. if you are in need of help to enlarge your Penis to Bigger and Thicker size, I advice you to contact Dr Aziba on his Personal Email Address ( PRIESTAZIBASOLUTIONCENTER@GMAIL COM ) or contact him on whatsapp Chat +2348100368288 his one of the best African Herbal doctor recommended to help you with the best and effective Herbal Product to enlarge your penis from as smaller as 2.2 inch to 9.2 inch within two weeks of use, Dr AZIBA is also specialized on the solution to LOW SPERM COUNT. i advise you to contact him for help. DR AZIBA whatsapp number +2348100368288...

Hello viewers around the Globe, I was despondent because i had a very small penis, about 2.5 inches soft and 4 inches hard not nice enough to satisfy a woman, i have been in so many relationship, but cut off because of my situation, i have used so many product which doctors for me, but none could offer me the help i searched for. i saw some few comments on the INTERNET about this specialist called Dr,OLU and decided to contact him on his email: Drolusolutinthome@gmail.com) so I decided to give his herbal product a try. i emailed him and he got back to me, he gave me some comforting words with his herbal pills for Penis Enlargement, Within 3 week of it, i began to feel the enlargement was surprised when she said that she is satisfied with my sex and i have got a large penis. Am so happy, thanks to Dr OLU I also learn that Dr OLU also help with Breast Enlargement Hips and Bums Enlargement etc.. If you are in any situation with a little Penis, weak ejaculation, small breast_hips_bums do get to Dr OLU now for help on his email ( Drolusolutionhome@gmail.com ) or add him on whatsapp line +2348140654426

I just want the whole world to know about this spell caster I met
two weeks ago, wisdomspiritualtemple@gmail.com I cannot say everything he has done for me my wife
left me 3 years ago left with my kids I was going through online
when I meant this wonderful man's testimony online I decided to
give it a try and my wife is back to me now and we ar1e happily
married again cause is too much to put in writing all I can say is
thank you very much am very happy .and does alot of spell
including Love Spell
Death Spell
Money Spell
Power Spell
Success Spell
Sickness Spell
Pregnancy Spell
Marriage Spell
Job Spell
Protection Spell
Lottery Spell
Court Case Spell
Luck Spell etc. In case you need his help contact him on this email
address wisdomspiritualtemple@gmail.com he is a good man
thanks.whatsapp number +234813 648 2342